It’s that time of year again. The temperature is beginning to drop, the days are getting shorter, and it seems that no matter when you peek out your window, it’s gloomy.

But if there’s one thing to look forward to in the fall, it’s all the pumpkin beer. Which got us thinking — With so many choices in the category, where do you begin?

So we invited a few of our loyal twitter followers and sat down on Wednesday evening to review 18 different offerings in the pumpkin beer category.

Beers were reviewed blind, on their appearance, aroma, flavor, mouthfeel and overall impression. After each tasting, we graded the beers on our 5-star rating system (in this case pumpkin).

Each beer we sampled had unique characteristics that showcased different aspects of the pumpkin — some admittedly better than others. Nonetheless, it was incredibly interesting to see each brewers manipulation of the ingredient, and how the pumpkin was showcased in various elements of the beer.

Listed below are notes on all 18 beers we drank, in the order in which we sampled them.

Shipyard Brewing Company makes two different pumpkin beers to celebrate the season. It’s their Pugsley’s Signature Series offering though that is your best bet when choosing between the two. A light, coppery-orange color is inviting but an overwhelming nutmeg and spice character dominates the nose. A viscous mouthfeel does little to hide the alcohol (9 percent) and the finish is slightly bitter and dry. Overall it’s a quality offering, especially if you are looking to pair with a hearty fall meal.

Brooklyn’s Post Road Pumpkin Ale has an elegant and inviting label, but failed to impress our judges upon sampling. While the earthy pumpkin aroma is nice, it is a bit one dimensional. A more vegetal flavor is the defining characteristic of this offering and the nutmeg and cinnamon additions are nearly undetectable. A long pumpkin finish lingers for a while. Overall Post Road Pumpkin drinks more like a pale ale without the hop presence.

The Imperial version of Cape Ann Brewing’s Pumpkin stout is an impressive take on a seasonal offering. This dark brown, almost black, stout is viscous with only hints of pumpkin flavor on a mocha backbone. As an imperial stout, it’s a great beer, but in the end, it’s almost impossible to compare this beer with the other pumpkin-forward offerings.

Typically a leader in the pumpkin category, Dogfish Head’s Punkin Ale was born out of a local “Punkin Chunkin” contest. Punkin is actually a brown ale that is brewed with pumpkin meat, brown sugar and nutmeg. A solid 2-finger head draws you in as a sweet pumpkin smell encourages you to sip. The aroma and flavor characteristics match well while a subtle hop character gives the finish a nice punch. Overall, Punkin is an easy drinking beer that at 7 percent is one you “can’t go wrong with.”

Wow. Talk about a well-made pumpkin beer. This beer has everything you could possibly ask for — A deep orange color, a two-finger head, and the perfect amount of carbonation. A sugary sweetness dances with earthy pumpkin aromas while hints of vanilla smooth out the body. The typical nutmeg and cinnamon flavors are present but don’t dominate and the pumpkin is really the star of the show here. Overall, this is one of the purest pumpkin beers on the market and one of our favorites.

Smuttynose has offered what most of us termed a “brewers’ beer.” With a slightly hazy, light orange color and two-finger head, this beer had tropical fruits (think mango, papaya, banana) on the nose, but it’s heavy hop character and bitterness made us question whether we had a pumpkin beer or an IPA. Don’t get us wrong, it’s a good hoppy offering, but the complete lack of pumpkin flavor or texture was not what we expected.

A clear burnt orange color with lasting two-finger head, Wachusett’s first pumpkin offering, Imperial Pumpkin, has a heavy aroma of two row malt, pumpkin puree, and graham cracker. The 8.3% ABV hits hot and hard on the first sip, but quickly gives way to a mouthful of pumpkin flavor and just a few notes of spice. Let your palate adjust to the higher ABV, and you will realize why this is such a solid pumpkin offering.

The pumpkin version of Harpoon’s UFO is a slightly hazy bright orange color with a clean, fresh pumpkin aroma. Some spice and even green apple were detected by a few of the judges. On the palate, everyone noticed a prominent apple pie sweetness with a light pumpkin flavor. It’s not too spicy and easy drinking, just as you’d expect from a beer in the UFO series.

While we certainly appreciate what the folks at Jolly Pumpkin do with their beer, something about a sour pumpkin offering just didn’t sit well with our panel. As a sour, this was actually one of the better offerings we have had to date, but as a pumpkin beer it missed the mark. Even though 30 pounds of pumpkin for every 310 gallons of beer are used in the brewing process, very little comes out in the way of flavor and aroma. At best, the pumpkin adds some body, but does very little to distinguish this beer as a pumpkin beer. Give it a try if you’re a fan of sours, but good luck picking out any pumpkin characteristics.

Often considered the quintessential pumpkin beer, Shipyard’s Pumpkinhead pours a light yellow color which most closely resembles a mass produced light beer. On the nose, cinnamon overwhelms with a hint of pumpkin buried deeper in the glass. The flavors matched the aromas with cinnamon and sugar being most dominant on the palate, but without much, if any, pumpkin flavor. Pumpkinhead is light and easy drinking, but many complained of a one-dimensional flavor and lack of complexity.

The Heavy Seas Great Pumpkin took us by surprise. A ton of pumpkin aroma dominates the nose while a hint of sweetness begs you to give it a sip. A solid pumpkin flavor is a bit overshadowed by a bitterness on the finish and an alcohol burn that is somewhat overwhelming. Out of all the beers we sampled, this had one of the most beautiful, deep glowing orange colors. Overall, it was nice to sample but we probably wouldn’t buy it again.

Of all the beers we sampled, this one seemed to lack the most pumpkin characteristics. A hazy amber color was uninviting and a musty aroma was an instant turn off. Most judges took two sips and moved on; agreeing that too much bitterness and a dirty taste was unbearable. Creative label artwork and a catchy name might encourage you to give it a try, but unfortunately that is the only thing Pumple Drumkin brings to the table.

Jacked was our first (and only) beer with an ABV that makes a play on Halloween (10.31 percent). A bright, rich brown color shows definitive elements of being aged on oak (which it was for 6 months). A fresh pumpkin and spice aroma sneaks its way to your nose, barely pushing past the notes of wood and cherry. An earthy flavor is present, but dominated by the bourbon notes. With such a high ABV, this is the only offering in the pumpkin category that should be aged, letting the harsher oak and bourbon flavors mellow out. Still, this beer was surprisingly drinkable given the ABV and offers something different than all the others we sampled.

Unlike its imperial big brother, the regular pumpkin stout from Cape Ann has a roasty, smoky aroma with some earthiness and pumpkin. While the aromas are to be expected, the lighter flavors and mouthfeel are more akin to a porter. Again though, the faint pumpkin flavor is overpowered by the stylistic nature of the beer. A good stout offering, but it doesn’t stack up against the other pumpkin-forward beers.

If you have ever carved a pumpkin, you know what this beer smells like. This offering from Southampton was quite possibly the most “pumpkin” of the entire group. The smell of freshly carved pumpkins was as real as the earth it originated from. A clean but earthy taste dominates the flavor profile while a more subtle bready malt characteristic finds its way to the back of the palate. A very low bitterness makes this offering incredibly drinkable — it’s no wonder it was our “honorable mention.”

As the overwhelming favorite by all judges, I bet you are wondering what makes this beer so appealing. PumKing is one of those beers that leaves you completely speechless. If Willy Wonka had a pumpkin factory, this would be it. Sweet, sugary smells of pumpkin, graham cracker and spice transport you to a bakery and make you forget you are drinking beer altogether. The perfect blend of earthy pumpkin flavor, cinnamon spice and smooth vanilla make this the quintessential desert beer. The 8.6 percent ABV is hardly noticeable and each sip leaves you begging for more. PumKing will undoubtedly be your favorite pumpkin beer you try all season — we guarantee it.

A relative new-comer to the Sam Adams variety pack, Harvest Pumpkin poured an deep, bright amber color with pumpkin-pie dominating the aroma. There’s a heavier mouthfeel courtesy of the pumpkin and a good malt character with plenty of pumpkin flavor on the palate. They have chosen to go with more pumpkin flavor rather than one dominated by spice or sweetness, which, in addition to such an appealing color for this beer, was universally appreciated by our judges.

Of all the beers we sampled, this one shouldn’t have surprised us as much as it did. Cambridge Brewing has a long history of making some very incredible beers, their Great Pumpkin Ale being one of the most acclaimed. Something about the hazy, unfiltered appearance was very fitting for a pumpkin beer. A well-balanced pumpkin and spice aroma lent itself to an even more balanced flavor. Nutmeg and fresh pumpkin dominate in the taste department while a light bitterness reminds you that “it’s still beer.” It’s no wonder this was one of our favorites, and why it was the first ever beer bottled by the brewery. 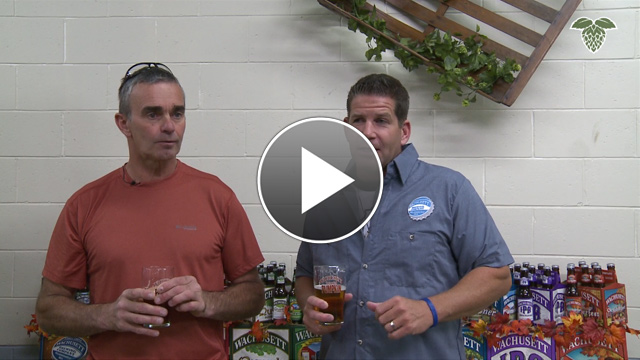 Editor’s Note: Special thanks to twitter followers @ngoss, @brookem07, @FrenchOakTV and Brewbound User DeleriumLax for their help in the review process.