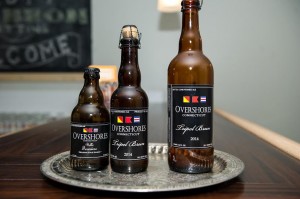 The brewery is open regularly on Thursday and Fridays from 4:00-7:00 pm and Saturday and Sunday from 12:00-4:00 pm for tours and tastings of both Overshores Brewing Co. signature beers and select Belgian beers from brewers around the globe.

“The Connecticut Pour Tour is a great way to bring awareness to the wide range of Connecticut-produced beers while raising money to help fight pediatric cancers,” said Christian Amport, founder and president of Overshores Brewing Co. “As the state’s first and only Belgian style brewery, we look forward to providing a different kind of tasting experience for all those who are participating in the Pour Tour.”

Overshores Brewing Co. is dedicated to the Belgian style of making beers. To be “Belgian” means to never compromise on taste, richness, strength of alcohol, and to enjoy total freedom in choosing ingredients. If it makes the beer better and more interesting, we put it in. Established in 2010 and located in East Haven, Overshores Brewing Co. is Connecticut’s first and only Belgian style brewery. Overshores’ signature and award-winning beers include Belle Fermiere Saison, Blanc de Blanche Wit, Overshore Simpel, Overshores Tripel Brun and Belgique du Noire. For more information, visit www.overshores.com.