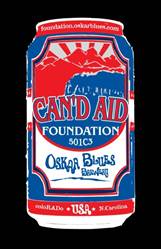 LONGMONT, Colo. — Since their inception in 1997, the folks at Oskar Blues have been committed to giving back to the communities in which their businesses grow and thrive. Over the years, the Oskar Blues Brewery and restaurants have provided support to those in need by organizing a variety of solutions like canned food and clothing drives at each of their locations during the holidays, to making monetary donations to local organizations.

“With just one point-in-time donation to our organization, Oskar Blues fed 5,000 people. Successful businesses can make a huge difference to the communities they live in,” said Edwina Salazar, executive director of the OUR Center.

For Oskar Blues’ owner/founder, Dale Katechis, helping people and giving back to the community is something that Oskar Blues has always been engaged in. In September of 2013, Katechis created the “Oskar Blues CAN’d Aid Foundation” to allow that engagement to expand at a local and national level. “It’s been a 15 year mission for me to organize a way to give back to the communities that helped build our businesses,” Katechis said.

Although the “CAN’d Aid Foundation” will develop national partnerships in a variety of focus areas including outdoor recreation, arts and music, and environmental sustainability, the foundation’s immediate focus will be on maximizing fundraising efforts for the expedited distribution of monies to the communities of Lyons and Longmont, CO; two areas that recently experienced massive devastation during severe flooding that struck the Front Range of Colorado. Many Oskar Blues employees, friends and family of the company were severely impacted by the floods, and Katechis’ main goal is to support immediate recovery efforts for those affected in both communities.

Diana Ralston, the executive director of the “CAN’d Aid Foundation” echoed Katechis’ sentiments about flood relief efforts, stating, “at Oskar Blues, our community is our family, and the recent massive flooding along the Front Range left a lot of our Colorado family members without homes, without towns, and in desperate need of help getting back on their feet. Fast-tracking our 501(c)(3) allows us to be a part of a long-term strategy to provide help to areas damaged by the flooding.”

With Ralston at the helm, several Oskar Blues fundraising opportunities are in place to support flood relief efforts at the local level.

Put a CAN’d Aid on it. Monetary donations can be made in the form of a check or online at http://foundation.oskarblues.com

Through the week of the Great American Beer Festival (September 22 through October 13), all Oskar Blues locations including Homemade Liquids and Solids, CHUBurger, and the Tasty Weasel tap rooms (Colorado and North Carolina) are donating $1 from every Oskar Blues brew purchased.

REEB Cycles, Oskar Blues’ bike company, is donating $200 from every frame or complete bike sold during the month of October.

Oskar Blues will also hype up flood relief fundraising efforts during the week of the Great American Beer Festival by donating a portion of the proceeds from the FBAG- Beer and Guitars, two-day festival in Sculpture Park in downtown Denver to the Oskar Blues Flood Relief Fund. The festival thrown in collaboration with the Love, Hope, Strength Foundation, will feature live music by 18 bands including The White Buffalo, The Kyle Hollingsworth Band, Bonnie and the Clyde’s, The Congress, and many more to be announced via http://fbagblowout.com/

Founded by Dale Katechis in 1997 as a brewpub and grill, Oskar Blues Brewery launched its craft-brewed beer canning operations in 2002 in Lyons, CO. It was the first American craft brewery to brew and hand-can its beer. Today there are more than 200 craft breweries canning beer. The original crew used a hand-canning line on a tabletop machine that sealed one can at a time. Oskar Blues Brewery in Longmont packaged 59,000 in 2011 and grew to 85,750 in 2012 while opening an additional brewery in Brevard, NC, in late 2012.