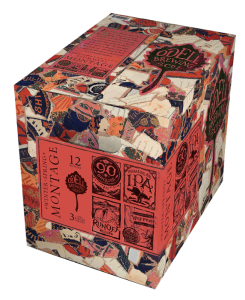 Named in honor of the hop growing community and the harvesting equipment many use, Wolf Picker is an experimental American Style Pale Ale brewed with two experimental hop varieties. The malt profile produces a light golden straw hue and a clean crisp finish that allows the hopback and dry hopping additions to shine.

The Winter-Spring Montage also features seasonal offering, Runoff Red IPA. Formerly known simply as “Red Ale,” Runoff boasts a hearty malt backbone and a ruby hue. The brew is dry-hopped with a generous amount of American hops giving the beer a fruity citrus aroma and a kick of grapefruit and pine hop character. Runoff is also available in six packs.

The Winter-Spring Montage will be available in the brewery’s ten state distribution region beginning January 13th. Odell Brewing will celebrate the release of Wolf Picker in the Tap Room on January 11th & 12th. Guests can enjoy samples of the beer, local food truck fare, and live music by Natalie Tate and Devin James Fry on Sunday from 3:30 – 5:30 p.m.