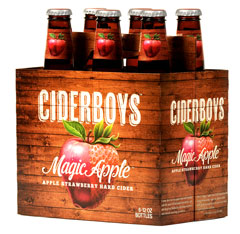 “Hard cider has been enjoyed in this country since colonial days; it’s as American as apple pie,” said Gabe Hopkins, Head Cider Maker at the Cider Boys cidery. “Today hard cider is one of the fastest growing segments of the adult beverage market,” he said.

According to market research, U.S. hard cider sales for both domestic and imported brands grew by 23 percent in 2010 and by more than 28 percent last year.

“At Ciderboys, we think that growth is going to continue, especially after hard-cider fans discover our products,” Hopkins said. “Now is the perfect time for Wisconsin hard-cider lovers to welcome a new family to the neighborhood.”

“Our fermentation process is cool and slow, taking approximately two weeks for each batch,” Hopkins explained. “When fermentation is complete, the cider goes through a filtration process that renders a clear, sparkling liquid.”

When making Cranberry Road and Magic Apple, the Ciderboys cider makers blend cranberry and strawberry juice in with the apple juice. To make Mad Bark, they boil more than 100 lbs. of natural cinnamon sticks and blend the resulting extract into the cider before fermentation. No sugar is added to any of the products, which are naturally gluten free, Hopkins said.

Each Ciderboys craft hard cider is a refreshing, fruity festival of flavor. “Hard ciders offer a realm of flavors ranging from sweet to tart, and our products cover that entire taste spectrum,” Hopkins said. “First Press is a traditional cider that’s on the sweet side, while Cranberry Road is very much on the tart side as you might expect. Magic Apple and Mad Bark fall somewhere in between.”