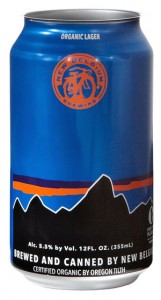 For 40 years, Patagonia has led the way in developing innovative outdoor gear and in environmental responsibility. To toast the company’s accomplishments, New Belgium partnered with Patagonia to create California Route, an organic California common-style beer. Boasting California lager yeast with subtle fruity esters and a refreshing light lager finish, California Route organic lager is canned for adventure. The beer has an aromatic blast of citrusy Cascade hops and a heavy dose of noble hallertau. The addition of organic Munich specialty malt builds complexity with hints of freshly baked bread. Consistent with Patagonia’s long-standing commitment to organics, the beer is brewed with certified organic ingredients.

“New Belgium has long admired Patagonia and it is an honor they thought of us for this collaboration,” said Bryan Simpson, New Belgium’s media relations director. “We’ve exchanged ideas and best practices over the years and most recently collaborated on the Save the Colorado campaign. Having an organic beer to celebrate four decades of Patagonia’s good work is very gratifying.”

“When my sister, Claire, had the idea of brewing a 40th anniversary beer, the folks at New Belgium immediately came to mind,” notes Fletcher Chouinard. “Not only are they forward-thinking in their business and brewing practices, but their beers have been a go-to for our crew and customers around the country for a long time. They were great to work with and we couldn’t be more stoked about the project!”

New Belgium Brewing, makers of Fat Tire Amber Ale and a host of Belgian-inspired beers, is recognized as one of Outside Magazine’s Best Places to Work and one of the Wall Street Journal’s Best Small Businesses. The 100% employee-owned brewery is a Platinum-level Bicycle Friendly Business as designated by the League of American Bicyclists, and one of World Blu’s most democratic U.S. businesses, and a Certified B Corp. In addition to Fat Tire, New Belgium brews eight year-round beers; Ranger IPA, Rampant Imperial IPA, Shift Pale Lager, Sunshine Wheat, 1554 Black Ale, Blue Paddle Pilsener, Abbey Belgian Ale and Trippel. Learn more at www.newbelgium.com.

Patagonia, Inc., based in Ventura, California, is a leading designer and retailer of core outdoor, alpine, fly fishing, snow, surf and sport-related apparel, equipment, footwear and accessories. The company is recognized internationally for its commitment to authentic product quality and environmental activism, contributing over $58 million in grants and in-kind donations to date. Incorporating environmental responsibility into product development, the company has, since 1996, used only organically grown cotton in its clothing line. The company’s entire product line is recyclable through its Common Threads Partnership. The Footprint Chronicles┬« microsite at patagonia.com/us/footprint explores the company’s environmental and social footprint.