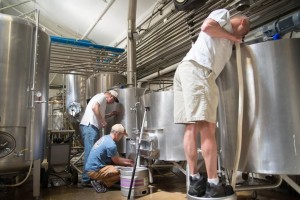 But while the COBF is the fifth-oldest beer festival in the US and Colorado’s first statewide beer fest, it’s not resting on its laurels for its silver anniversary.

Instead, the festival (which draws an average of 15,000 people each year) is using the 2014 festival to kickstart its next 25 years with a wealth of extra-beery new features. Here’s the rundown on these brand new features:

This year the Colorado Brewers’ Festival will have the biggest and most ambitious beer list of its 25-year history. The two-day affair will present 100+ thoughtfully chosen beers from 50+ Colorado breweries.

For the first time ever, the COBF will feature different beer lists on each day of the two-day affair. This unique beer programming gives attendees a different list of 50+ year-round and specialty Colorado beers to taste each day. The rotating lists also give attendees extra value for their festival Beer Package wrist bands, which are good for both days of the festival.

This year the festival starts a new annual tradition with a beer brewed especially for the COBF’s anniversary. This year’s anniversary beer is an adventurous, hybrid creation brewed by COBF founders Doug Odell (Odell Brewing), Brad Page (a founder of CooperSmith’s Pub & Brewing in Fort Collins) and Dwight Hall (CooperSmith’s Pub & Brewing). The beer is a pale, dry, tart-finishing ale with a unique twist: 20% of the beer’s fermentables come from apple juice Page uses for his ciders at his current venture, Colorado Cider Company. The beer also includes a dash of acidulated malt to emphasize the beer’s tang. This limited-release beer (brewed at Odell Brewing on June 9 on the brewery’s pilot system) will be available only at the COBF and the Odell Brewing tasting room and CooperSmith’s during COBF Week, June 23-29.The beer is 5.5% ABV and perfect for adventurous and thirst-quenching quaffing.

The Summit (Presented by the Colorado Brewers Guild)

A brand new feature for die-hard beer nuts, The Summit features twenty rotating kegs each day of hard-to-find and exclusive Colorado beers. The Summit also includes daily beer education seminars in “Beer School” and a “Meet the Brewers” tent where attendees can rub elbows with brewers.

COBF Breakfast and Brews at The Mainline

The first annual pre-COBF brunch takes place Saturday, June 28th, from 9-11 AM at The Mainline in downtown Fort Collins. Breakfast & Brews attendees enjoy a special breakfast of brunch dishes and morning-minded beers. After breakfast, attendees enjoy a short walk to the festival grounds in a tuba/trumpet/trombone-led procession and will be the first beer lovers to enter the festival grounds. Breakfast & Brews costs $40 and includes brunch, a COBF “Beer Pass” wristband, commemorative “beer can” festival glass, and Festival Bucks for ten samples of beer. Buy tickets at www.DowntownFortCollins.com .

For the first time, the COBF will welcome hard ciders to the beverage list with ciders from Colorado Cider Company and Wild Cider. This move tips a hat to Colorado’s growing craft cider trade and its craft beer connections. The ciders also provide gluten-free alcoholic beverage options for attendees.

This year’s festival will host thirteen brewers new to the COBF, giving attendees over two-dozen new beers to taste from some of the state’s newest breweries. There will also be a number of previous COBF breweries making return engagements to the festival after a short hiatus.

Win a Year of Odell Beer

Online advance ticket buyers this year are entered into a drawing for a complimentary year of beer from Odell Brewing Company.

In a change that reflects the fest’s first years, this year’s COBF patrons can enjoy the fest’s entertainment, attractions and activities for no charge.

Beer lovers can purchase a $20 Beer Package that includes 10 “Festival Buck” tickets for ten samples of beer. The Beer Packages are available at the festival and online in advance at www.DowntownFortCollins.com .