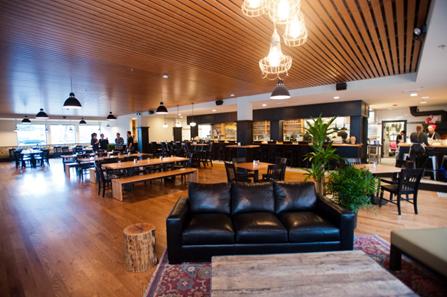 BOULDER, Colo. — Mountain Sun Pub & Breweries, 19-year veteran of Colorado’s $450 million craft brewing industry, welcomes a new member to its family of pubs and restaurants. Under the Sun, located at 627-A S. Broadway, directly below the current Southern Sun Pub and Brewery, is now open to the public.

Designed as a warm and comfortable, yet slightly upscale community space, the new restaurant features value-driven, fresh, local food prepared mainly in its wood-fired oven. Managing partner and former kitchen manager Tim McMurray has driven Under The Sun’s food mission; he created most of the recipes and has spent the last three years eating every version of wood-fired roasted chicken within a 30-mile radius in a quest to perfect his own recipe. McMurray hired Melissa Harrison, former Boulderite and top Chef competitor, as a consultant to support Mountain Sun’s executive chef, Annabelle Forestall, to design the menu and hire and train the culinary team.

Staying true to Mountain Sun’s commitment to excellent craft beer, Under the Sun features 21 Mountain Sun brews on tap (the most in-house beer of any brewery in Colorado). Additionally, the bar has additional taps that feature eight to ten rotating guest craft beers, as well as a selection of sustainable red and white wines. Bartenders will also pour the “world-famous” Mountain Sun margarita and eventually offer a full cocktail program.

“This restaurant is simply a different room in the Mountain Sun house,” said Mountain Sun founding proprietor Kevin J. Daly. “We have always strived for our pubs to be gathering places for great food, craft beer, and free-flowing conversation. This concept will strive to do the same; we are excited to put a new spin on our mission to the Mountain Sun family of pubs.”

Under the Sun was designed by Melissa Friday, a well-known restaurant designer in the Denver community who has worked on projects such as Boulder’s Snooze Diner and the New Great Divide Brewing Company.

Founded by Kevin J. Daly in 1993, the original Mountain Sun Brewery, located in downtown Boulder, Colo., was the first Colorado microbrewery to produce award-winning beer within a comfortable brew-pub atmosphere and community gathering place. With a commitment to high quality ingredients, practices and employee participation, the uniquely eclectic atmosphere of Mountain Sun continued to expand. Southern Sun Pub & Brewery opened in Boulder, Colo. In 2002, and Vine Street Pub opened in Denver, Colo. in 2008.