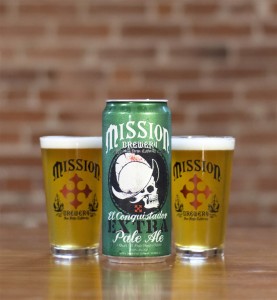 San Diego, Calif. — On November 1st, Dan Selis, President and Founder of Mission Brewery in San Diego, was notified that Mission’s El Conquistador Session IPA had won a tender with Systembolaget, the Swedish alcohol retail management system, choosing Mission’s El Conquistador as the US import for this category. Systembolaget is a government owned chain of liquor stores in Sweden. It is the only retail store allowed to sell alcoholic beverages that contain more than 3.5% alcohol by volume.

Winning the tender is a long and comprehensive process. Product samples for each request for tender are submitted and the final selection is made by a blind tasting panel. The product that has the highest quality that corresponds to the tasting profile requested is the product launched.

El Conquistador scored 24/25, a year’s high, even with 40 other, much larger, award-winning local and national breweries competing.

“When I got the news, I was blown away,” said Selis. “This is a real honor considering the competition and the judging criteria.” 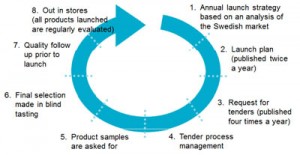 Systembolaget has a nationwide retail network of 426 stores and had over 120 million costumers through its doors in 2013. The product range of wine, strong beer and spirits is one of the most comprehensive in the world. Mission Brewery is filling 70,000 twelve ounce bottles for its first shipment to Sweden.

The process for breweries getting their beer or spirits into Sweden is lengthy, shown in the diagram.

El Conquistador is a low-alcohol content, drinkable Session IPA at just 4.8% ABV with a pale golden color, soft lemon and melon esters, and a bready malt body. Dry hopped with Centennial and experimental hops from the Yakima Valley, El Conquistador is available in the US in 12 oz six packs, 22 oz bottles and the infamous 32 oz “cannon.”

Mission Brewery was originally established in 1913. The brewery, like most breweries of the time, went out of business during the first year of Prohibition. In 2007, Dan Selis, an avid home brewer re-established the brand and eventually relocated the manufacturing and the tasting room to Downtown San Diego in the Historic Wonder Bread Building in the East Village. Mission has been brewing commercially for over seven years. With over 30 National and International awards under its belt, Mission is considered one of the top craft breweries in San Diego County. Follow Mission at Facebook.com/MissionBrewery, Twitter.com/MissionBrewery and www.missionbrewery.com.