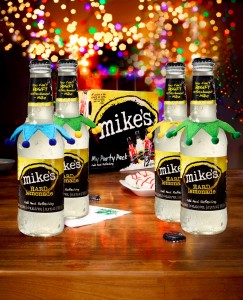 CHICAGO — Mike’s Hard Lemonade Co., best recognized for its iconic mike’s® hard lemonade, decks the halls with fun and flavor this season with its first-of-its-kind social media-based “Tw’elf Re-Gift-O-Rama” in which everyone is a winner.

Updating the selfie trend for the holidays, the re-gift-o-rama encourages participants to capture and share their mike’s holiday moments with a #Twelfie (a selfie with any kind of mike’s hard lemonade – friends, costumes, furry animals and other festive elements encouraged) via Facebook or Twitter to receive an instant gift – which they can either keep for themselves or pass to someone else in their social network.

As with classic White Elephant gift exchanges, in the Tw’elf Re-Gift-O-Rama reinvention everyone receives a gift, ranging from “gags” such as funny GIFs, mounted squirrel heads or mike’s-branded footie pajamas to more coveted items such as smart watches, gaming systems and gift cards. To participate fans must:

“We’ve all been to our fair share of ugly sweater parties. This year, we got the whole company together to figure out how to dress up the season in an exciting, less-predictable way,” said Sanjiv Gajiwala, vice president of marketing, Mike’s Hard Lemonade Co. “In exchange for sharing your #Twelfie moments, we can’t wait to give you a present. But, unlike your well-intentioned family and friends, we won’t get upset if you re-gift it – in fact, we encourage you to spread the joy!”

This company-wide collaboration is just one example of how Mike’s Hard Lemonade Co. is focused on building personal connections with its fans through fun, social occasions. Already underway, the gift exchange will run until 11:59pm on Dec. 24, making it perfect for both early and last-minute shoppers.