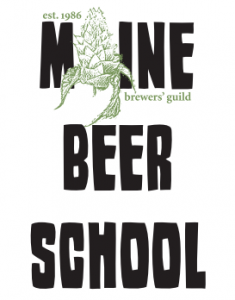 Maine — Move over Beer Camp, it’s time for Beer School. Although many might joke that they majored in beer in college, few can say they truly attended Beer School, until now.

Maine’s craft beer nonprofit — the Maine Brewers’ Guild, has announced the launch of Maine Beer School, with the first semester planned for 2015.

The organization will partner with its member breweries and allied members to launch a series of interactive, engaging classes to take place all around Maine in 2015 and beyond that will promote Maine’s world-class craft beer industry to the public, while raising funds for the organization. Part educational, part fun, the events and will offer a variety of interactive, small format events that aim to introduce novice and expert beer drinkers to the art, science, and personalities that make Maine’s craft beer scene unique.

Speaking about how the Beer School concept came together, executive director of the Guild, Sean Sullivan, explained, “Great beer is being produced all over the state, and breweries are thinking more about what makes them unique, and what expertise they want to share with the beer drinking community. Beer School offers a way for our brewers to give the public a peek behind the curtain, share their passion for the beer their brewing, and give Mainers and visitors a chance to have a one-of-a-kind experience centered around beer.”

The 2015 Beer School Spring Semester Course Catalog offers a glimpse of the types of classes that will be offered. Courses range from the introductory (“Hop Knowledge” with Maine Beer Co.), to the scientific (“Beer Breaking Bad: Chemistry and Sensory of Off-Flavors” with Rising Tide), to the artful (“The Art of Blending Barrels” with Allagash). Prices will vary by event but “will likely range between $25-50 per class, and go on sale approximately 4 weeks before each event” says Sullivan.

It won’t all be class time, however, Baxter Brewing will offer a field trip to Streaked Mountain in Hebron, and Orono Brewing Co. will be offering a mountain biking excursion. Likewise, Banded Horn will be welcoming students to owner Ian McConnell’s family farm in Etna, Maine to harvest spruce tips to be used to brew their Greenwarden beer.

The offerings of Beer School will continue to evolve in future semesters. “There’s talk of brewer-home brewer conferences where home brewers would get feedback on their recipes, brews, and tips from the pros, and other events that involve a multiple breweries” said Sullivan.

“We have some of the most passionate beer drinkers in the country here in Maine, and we’re very excited to roll out this Beer School concept for 2015,” said Heather Sanborn, president of the board of directors for the Guild and co-owner of Rising Tide. “Beer School moves us beyond the traditional beer festival model and provides opportunities to promote Maine beer throughout the year.”

More info, and a full listing of courses can be found on the Maine Brewers’ Guild website at http://mainebrewersguild.org/beerschool/

About the Maine Brewers’ Guild:

The Maine Brewers’ Guild is a nonprofit organization dedicated to promoting and protecting the craft beer industry in Maine. Our mission is to keep Maine in the forefront of the craft beer revolution by offering high quality and creative diversity for the customer. The Maine Brewers’ Guild also offers the Maine Beer Trail passport – a checklist guide to the breweries of the state in which visitors to 10 or more Maine breweries are rewarded with prizes. More info on the Guild can be found at:www.mainebrewersguild.org