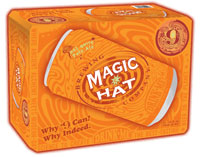 SOUTH BURLINGTON, VT – Magic Hat Brewing Company is the latest brewery to join the canned beer craze that is up more than double across some channels according to the most recent IRI data.

Steve Hill, the Social Networking Manager for North American Breweries confirmed via email that the #9 beer is currently being distributed in 12-packs across Magic Hat’s entire distribution area, except for California.

“We’ve always tried to be a constantly evolving brewing company, and with the success of cans and the enthusiasm that’s been built around them over the last two years or so, we thought 2011 was as good a time as any to get our toes wet,” said Hill. “More importantly, it gives our fans a chance to bring #9 to new places: music festivals, camping, beaches…places where glass isn’t allowed.”

The cans will be available in the marketplace until July 31st, while supplies last.

As for canning other styles in the future, Hill said they will see how well #9 is received this summer and decide.

“So far, we’ve had a great, positive response from people. We’ll definitely be taking peoples’ opinions into consideration at the end of summer,” he said.