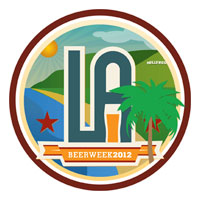 LOS ANGELES – You know that “It’s The Most Wonderful Time of the Year” song that incessantly plays on the radio come December to help ring in the string of end-of-year Hallmark holidays? Well, we’re calling on local radio stations to start putting it in the loop right now, since the 4th Annual LA Beer Week (Sept 20-30) is finally upon us!

What makes it the most wonderful time of the year, you ask? Well, besides the LA Beer Week Festival at Union Station, the vast array of commemorative prickly pear beers being made by local brewers, and the crazy sampling of events that we told you about, we’ve got a few more aces up our sleeves that we’d love to share with you!

As an added incentive to head out to multiple events this year (as if the events themselves weren’t incentive enough), we’ve devised the brilliant LA Beer Week Bucket List to help steer you in a few adventurous directions. Your mission, should you choose to accept it, is to collect special stickers by participating in certain types of events: visiting local breweries, attending a beer education seminar, moseying out to one of our highlighted shindigs, and seeking out an extra special, rare beer. Those who complete this most noble quest, collecting all four stickers and bringing their finished Bucket List to the LA Beer Week Festival are then entitled to a bottle of the official LABW beer, Unity, from Eagle Rock Brewery! It also gets you into a drawing for free tickets to the amazing BAM Fest (Beer, Art, and Music) on Oct. 6th in Santa Monica!

Wanna participate? Piece of cake. Just print out an LA Beer Week Bucket List from home and plot out your course using our fun-filled events calendar.

We’ve got some awesome local breweries with some beautiful looking bottle caps emblazoned with their logos. Homies like Eagle Rock Brewery, Hangar 24 Craft Brewery, The Bruery, Black Market Brewing, and Brouwerij West. If you can collect a dozen of those bottle caps, you can trade em in for an official LABW hat at the LA Beer Week Festival. (Hat = cap. Bottle cap. Caps for Caps… see what we did there?)

And for those local breweries who aren’t yet marking their bottle caps with their logo, we’ve partnered with local bottle shops/LABW sponsors to place special stickers on those caps to help spread the love and make this little program even more of a happy success. Look for the stickers at these fine potent potable purveyors:

If for some unknown reason you aren’t attending the LA Beer Week Festival, you can bring said 12 caps to Eagle Rock Brewery or Beer Belly to claim your superfly sombrero.

The true craft beer cognoscenti are using Untappd to check-in to their favorite beers, a newfangled 21st century kind of way to drink socially, if you will. Users of the free app can receive the official Untappd LA Beer Week badge simply by checking into any beer between Sept. 20-30, with their location geotagged anywhere within Los Angeles or Orange County. Not using Untappd yet? Well, what are you waiting for?! Head to untappd.com on your smartphone to get started.

LA Beer Week is an annual celebration of local beer culture, taking place throughout Los Angeles & Orange Counties (and their respective environs) from September 20-30. Enlightened bars, restaurants, bottle shops, and breweries will come together to present a large number of events all around town, with focused tastings, educational seminars, and beer pairing dinners to please craft beer aficionados and neophytes alike. These resplendent activities culminate with the signature LA Beer Week Festival on September 30, from 12-4pm at the historic Union Station. $50 pre-sale tickets for the flagship festival are available now, which entitle attendees to unlimited 4oz. tasters of beer from over 70 of the world’s most respected craft and artisan breweries.