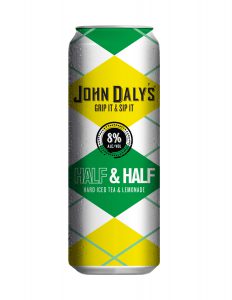 CHICAGO — Known for good times on and off the golf course, John Daly has partnered with Phusion Projects to release a line of drinks based on the classic cocktail bearing his name, made of alcohol, tea, and lemonade. It was imperative for the John Daly’s Grip it & Sip it line to match the quality and freshness of the cocktail commonly found at bars and restaurants across the country. That is why both of the newly released John’s Daly’s flavors, Hard Tea and Half & Half, are made with real black tea and premium ingredients. Available in ready-to-drink 16oz. cans at 8% ABV, this line of refreshing beverages offers an extra punch for those looking to kick it up a notch, without compromising taste.

For years, Daly’s “grip it and rip it” attitude has earned him scores of golf fans who preferred a star that stood out from the sport’s typical country club persona. On and off the course, Daly lives life his way, motivated by the desire to have fun in every aspect of his life. John Daly’s Grip it & Sip it line was created to reflect his authentic lifestyle.

For Daly, collaborating with Phusion Projects to bring this drink to market was an easy decision. “It was time to bring legitimacy to the John Daly cocktail. I wanted it to be an accurate representation of who I am. Phusion embodies the carefree and fun attitude that I do, so we got it right with this new line of John Daly’s.”

While the name initially draws golf fans, John Daly’s drinks appeal to those on and off the course. In the past year, the demand for hard tea and half & half flavor profiles has experienced double digit growth,1 while sales of flavored malt beverages in 16oz. cans at 8% ABV and higher have grown 15.6% versus last year.2 With hard tea in a can remaining a relatively untapped category, Phusion and Daly saw an opportunity to enter the market with a premium product that embodies Daly’s larger-than-life personality.

Since the company’s inception, Phusion Projects has encouraged fans to unfold their own story through its flagship Four Loko brand, while being committed to operating as a responsible member of the alcoholic beverage industry. To learn more about Phusion Projects and John Daly’s drinks, please visit www.phusionprojects.com.