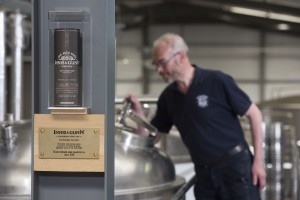 Edinburgh, Scotland — Unprecedented demand for Innis & Gunn’s latest limited edition beer has seen the Scottish craft brewer take a step to preserve a bottle for posterity before stocks disappear. The 7.7% ABV beer named Vintage has been placed in a time capsule with instructions to be opened in the year 2116.

Innis & Gunn fans across the globe, including those here in the U.S, have been hot on the trail to snap up one of the limited edition bottles produced. Vintage is a bottle-conditioned strong ale that becomes richer and more complex the longer it is left. Although the beer is brewed to be drunk on the day of release, time is on the beer’s side as the yeast contained in the bottle continues to condition the beer beyond its official ‘Best Before’ date.

The time capsule sees Innis & Gunn’s Vintage displayed in sealed transparent enclosure at Innis & Gunn’s Inveralmond Brewery in Perth, Scotland. The time capsule will be opened by the Innis & Gunn brewers of the future in one hundred years time. The absence of food spoilage bacteria in the beer will mean the century old Vintage will be drinkable, with a flavor profile far different from how it tastes today. 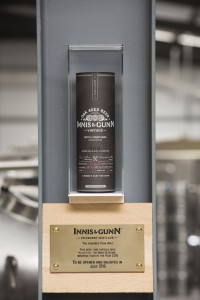 “I’ve been brewing beer for the past 30 years and with each new recipe there’s always something new to learn. This was certainly the case with Vintage, which has been a labor of love that takes another giant step in our innovative approach to beer.

“The fact the beer continues to mature and change over time inspired us to preserve it in such a unique way. We want the time capsule to serve as a reminder for us to keep innovating, keep pushing boundaries and keep expanding people’s ideas of what beer can be. Just like Vintage, we’ll continue to get better with time and I just wish I could be there in one hundred years when the brewers open up the capsule and taste the beer. “

Vintage comes in 500ml bottles and the last few bottles are available in Costco stores nationwide. The beer is matured in American Bourbon casks and only 8,000 bottles have been produced for sale.

The move comes shortly after Independent brewer, Innis & Gunn, took home Gold and Bronze Medals at the U.S. Open Beer Championship – one of the largest and most renowned international beer competitions. Dominated by North American brewers, Innis & Gunn were the only Scottish brewer to win an award, and defined their category with two wins in Wood/Barrel Aged Dark Beer, beating domestic brews in the process.