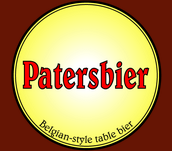 This traditionally brewed Belgian-style table beer was originally offered for monastery meals or special celebrations, and while not designated as a specific style, the Belgian yeast strain in Patersbierproduces amazing esters and aromas of spice, peach and apricot. Unlike anything Sebago has yet put forward, this beer was a favorite at the Belgian-style pilot beer night held last winter and begged to be ramped up to a full batch. Patersbier is on track to go fast, but hopes to be available through July of this year.