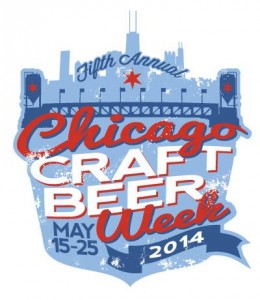 CHICAGO, Illinois — Numbers doubling, tripling and quadrupling all define the growing Chicago craft beer scene and the Illinois Craft Brewers Guild’s 5th Annual Chicago Craft Beer Week (May 15-25). Since 2011, the number of venues participating in CCBW more than quadrupled with over 300 locations involved in 2013 and the number of events tripled with over 500 last year. Plus, the number of new local breweries in the Chicagoland area more than doubled each of the past two years.

“It’s been incredible to see the ongoing and widespread support for every brewery, brewpub, bottle shop, and craft beer bar that opens in our fine city. That’s why Chicago Craft Beer Week is so important to us. It’s a chance for us to throw a big 11-day party and say thank you to everyone who supports Chicago craft beer,” said Pete Crowley, president of the Illinois Craft Brewers Guild and Owner of Haymarket Pub and Brewery.

CCBW’s mobile app received a complete facelift and now fully syncs up with the CCBW event database. This enables the full schedule to be accessible anywhere, anytime from a mobile phone. Users can search by neighborhood, date, or distance from their current location. This year, users can download the mobile app here and experience new features not available in the 2013 version, such as:

┬À “Instagram Pic of the Day” — One Instagram photo tagged with, “#CCBW” will be chosen daily from May 15-25. Winners will receive free tickets to Guild events and ImBIBE Memberships.

┬À Micro-Waste Micro-Brew (Wednesday, May 21st, 2014 / 7:00 p.m. at The Beer Bistro — North) Sustainability is defined as how biological systems endure and remain diverse and productive. Healthy ecosystems and environments are necessary to the survival of humans and all living organisms. This is an evening of sustainable education, presented by Seven Generations Ahead, the NRDC, and Goose Island Beer Company. Local leaders from each association will present their views on sustainable practices that not only affect our local breweries, but our City as a whole. Proceeds to benefit Seven Generations Ahead. Ticketed Event.

┬À Public Hop Rub (Friday, May 23rd, 2014 / 7:00 p.m. at BuckleDown Brewery) This is the ultimate educational experience for home brewers and fans of craft beer, alike. Nunzino Pizza, owner of Hop Head Farms in Hickory Farms, MI, will walk participants through a brewer’s hop rubbing process. A truly unique experience usually offered to only professional brewers, Nunzino will bring education and his expertise to the public. Hops have both aromatic qualities and bitterness qualities. Attendees will have the opportunity to experience both sensations, as well as sample craft beers from BuckleDown Brewing. Owners Ike Orcutt and Sean Mahoney will also be present for any questions regarding the hop rub and brewing processes. Proceeds to benefit the ICBG. Ticketed event.

┬À West Loop Craft Beer Fest (WLCBF) (Saturday, May 24, 2014 / VIP event begins at 12 p.m.; General Admission 1:00-5:00 p.m. in the West Loop). The city’s largest craft beer outdoor block party hosted by the Chicago French Market and the Neighbors of the West Loop. All tickets include craft beer tastings and a sampling glass. Proceeds to benefit the Neighbors of West Loop and the ICBG. Ticketed event.

Chicago’s community of craft beer enthusiasts will also support American Craft Beer Week (May 12-18, 2014) through their participation in CCBW. ACBW was started in 2006 and has grown each year. In 2011, ACBW events were held in all 50 states, paying homage to America’s more than 1,700 small, independent craft brewers.