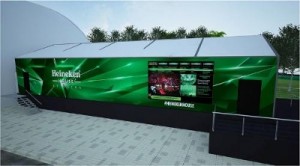 WHITE PLAINS, N.Y. — Heineken┬«, the official malt beverage of ULTRA MUSIC FESTIVAL, March 28-30 at Bayfront Park in Miami, will again offer the Heineken House for consumers, ages 21 and over, during the festival. The Heineken House will feature DJ performances and premium views of the Worldwide Stage, along with unique photo opportunities, dancers and ice cold Heineken, of course.

“ULTRA MUSIC FESTIVAL in Miami is like the world Olympics for artists and DJs,” said Justin Oh. “My first ULTRA experience was as a fan, and to now travel half-way around the world to showcase my music there is pretty awesome.”

Also new this year, festival-goers can become part of the action through “FestivalFamous,” Heineken’s challenge to fans to experience as many DJs as possible. By taking the closest photos of the most acts during the festival, and sharing via their personal Instagram account tagged with #HeinekenHouse, one winner will have the opportunity to join one of the DJs on stage — in front of thousands of fellow fans — to maximize the ULTRA experience.

“FestivalFamous” will run Friday (March 28) and Saturday (March 29), and participants will be able to review their standings and the top images on a leaderboard, visible on-site via the Heineken House’s LED ShareWall, or on their mobile phones via festivalfamous.com, which will go live as the weekend kicks off. Then, on Sunday (March 30), the winner will join DJ Koo on stage as runners-up receive priority viewing for themselves and a guest.

“Heineken is a proud sponsor of ULTRA MUSIC FESTIVAL and a long-time friend of the EDM community,” said Leanne Maciel, brand manager for sponsorships and events, Heineken. “In our seventh year of partnership, we’ve continued to look for ways to get fans outside their comfort zones and we’re excited to bring forth these rich experiences for the passionate EDM community.”

About Ultra WorldwideÔäó
ULTRA WORLDWIDE is the global brand of the World’s Premier Electronic Music event ULTRA MUSIC FESTIVAL. An internationally renowned event that has taken place every March since its inception in 1999, Ultra Music Festival celebrated its 15th anniversary in Miami in 2013, by becoming the first major electronic festival to produce an event over two consecutive weekends. Boasting the hottest names and the finest talent to be found anywhere on the planet, Ultra Worldwide is now the most international festival brand in the world by far, as it continues to transport the unrivaled experience from its Miami flagship event to an ever-growing number of destinations and fans all over the globe. Add in their pioneering live stream, ‘Ultra Live’ and Ultra Worldwide is able to bring the festival experience online to over 11 million unique viewers globally.

Over the past 15 years, literally thousands of the world’s most iconic DJs, producers and live acts have mesmerized audiences with awe-inspiring sets at Ultra events in Argentina, Brazil, Chile, Croatia, Ibiza, Korea, South Africa and of course Miami. Each new global edition has been founded on the same successful formula that has been perfected over 15 years in Miami, combining the most diverse electronic talent with the most technologically advanced, large-scale festival productions in the world.

In 2014, Ultra continues to push the boundaries, bringing its unparalleled combination of cutting edge production and the world’s best electronic acts back to its previous strongholds and to new frontiers across the globe. With a brand new edition already complete in South Africa, and with a first Japanese edition due later this year too, 2014 will see Ultra in NINE COUNTRIES and FIVE CONTINENTS.