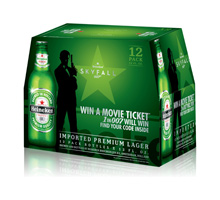 NEW YORK – HEINKEN, the number one selling European Lager in the U.S., and James Bond, the 2nd highest grossing movie franchise ever, are once again joining forces to drive consumer excitement and maximum retail impact for the launch of the newest Bond franchise movie, Skyfall. In celebration of its 15-year partnership with Bond, HEINEKEN is announcing details of PHASE I of its comprehensive, September through mid-November retail program leading up to and leveraging the November 9 release of Skyfall. Skyfall, featuring A-list actor Daniel Craig in the title role, is the 23rd film in the globally embraced Bond series.

On September 21, Heineken will debut its Skyfall TV spot, the next installment in the brand’s highly-regarded “Legends” campaign and the center of the brand’s comprehensive media investment that includes TV, OOH, digital and trade advertising. The new spot will feature Heineken’s “Man of the World” and Bond actor Daniel Craig in high-energy, Bond-style action and will air from September 21 through the end of the year.

On October 1, HEINEKEN will kick-off its fall movie retail activation featuring dynamic Bond-themed promotional packaging on 12-, 18-, and 24-packs of HEINEKEN. Unique codes, printed in the packs, will serve as the gateway for consumers to enter for a “1 in 007” chance to win a Skyfall movie ticket. Mass displays with movie themed enhancers, dynamic POS materials, including price and tuck cards, cooler decals, Bond standees and pole toppers along with channel specific MIR and IRC offers (where legal) will drive consumer traffic and impulse purchase at retail.

Vieira concluded: “To date, the Bond franchise has generated over $12 billion in ticket revenue which underscores the popularity of this iconic film series. Our goal through Heineken’s PHASE I Bond activation is to leverage the anticipation and excitement of Skyfall to drive incremental display activity and increase store traffic and sales of Heineken leading up to the film’s release. Stay tuned for details of our Heineken/Bond PHASE II Holiday activation.”