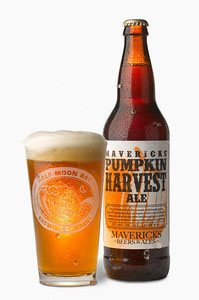 Wednesday, September 25, 4-6 p.m., Mavericks Beer Garden (admission is free) Celebrating the abundance of local pumpkins in and around Half Moon Bay, BrewmasterJames Costa has created an amber ale that features over 120 pounds of Sugar Pie pumpkins. Although the Pumpkin Harvest Ale will be available starting mid-September, guests are invited to come celebrate the release of this seasonal favorite at a special release party on September 25, with highlights of the Oktoberfest menu presented by Executive Chef Gaston Alfaro, and Oktoberfest music by Big Lou, the Accordion Princess.

This Pumpkin Harvest Ale is an amber ale made with more than 120 pounds of locally-grown, roasted and spiced Sugar Pie pumpkins which are added to the brew kettle, resulting in a subtle pumpkin pie flavor balanced by a biscuit maltiness. Mavericks Harvest Pumpkin Ale will be available September through November at the Half Moon Bay Brewing Company. Alcohol by volume is 5.5%.

In honor of the annual Oktoberfest in Munich, Germany, the Half Moon Bay Brewing Company is joining pubs across the world in a festive celebration of beer and food. In addition to the restaurant’s coastal cuisine, Executive Chef Gaston Alfaro will also be offering a beer-friendly Oktoberfest menu reflecting the cuisine of Germany. Available September 16 —October 6, menu items will include a special local cheese and meat platter as well as Chicken Wienerschnitzel, a tender chicken breast that is breaded and lightly pan-fried and served with a savory Shitake mushroom tarragon sauce. There are also a variety of classic German sides that can be selected with every entrée, including Potato Pancakes with fresh applesauce; Slow-cooked Red Cabbage with sliced apples and onions and Sauerkraut with sautéed onions, caraway seeds and fresh apples. Also starting September 16 is an All Day Happy Hour at the Brewing Company which will take place in the bar Monday through Friday 11:30 a.m. — 6 p.m. (excluding holidays). Specials will include over 15 signature menu items as well as every beer, big shot and signature cocktail available from $4 to $7.

The Half Moon Bay Brewing Company has been a major sponsor of the world-renowned Half Moon Bay Art and Pumpkin Festival since 2005, which takes place on historic Main Street in Half Moon Bay,the Pumpkin Capital of the World. As part of its sponsorship, the Brewing Company will provide Pumpkin Harvest Ale to the Festival, available exclusively in the “Take 5 Lounge.” The lounge is located in the Coastside Adult Day Health Center parking lot at 645 Correas St. in Half Moon Bay, Saturday and Sunday, October 19 and 20, from 9 a.m. to 5 p.m. Proceeds from all beer sales are donated by the Festival to the Coastside Adult Day Health Center.

West Grand Boulevard, a Bay Area Motown, Soul and R&B band that covers hitsfrom the ‘60s through today, will provide a fun and classy soundtrack to the annual Halloween party at the Half Moon Bay Brewing Company. Guests of all ages are welcome to enter the annual costume contest, which awards prizes for a variety of categories, including Most Original Costume, Best Group Costume and the Costume Most Likely to be Imitated Next Year.

Celebrating the abundance of the outstanding farms, creameries and seafood on the San Mateo County coast, the Half Moon Bay Brewing Company is excited to announce their inaugural Harvest Dinner on November 12. This four-course feast prepared by Executive Chef Gaston Alfaro will include a local specialty in every course paired in palate-pleasing harmony with Brewmaster James Costa’s handcrafted beer. Some of the local specialties that will be featured at the Harvest dinner include cheese from Harley Farms, Dungeness Crab, Sugar Pie pumpkins and free-range Markegard meats. In keeping with the Brewing Company’s ongoing philanthropic initiatives, a portion of the evening’s proceeds will be donated to a Coastside charity. (Reservations required as space is limited to 40 people; tickets are available for purchase at http://hmbbrewingco.inticketing.com/events/348018;those with questions may call 650-728-2739.)

ABOUT THE HALF MOON BAY BREWING COMPANY

Recently selected by Men’s Fitness as one of America’s Top Ten Craft Breweries and by Travel + Leisure magazine as one of America’s Best Beach Bars, the Half Moon Bay Brewing Company is situated on picturesque Pillar Point Harbor overlooking the Marina in Princeton-by-the Sea. The Brewing Company expertly pairs a family-friendly, come-as-you-are atmosphere with a winning combination of fresh, sustainable seafood, craft beers, live music and an expansive, dog-friendly patio area with blazing fire pits to keep patrons warm on the waterfront. The Brewing Company is a casual coastal venue that has become an institution in the Half Moon Bay area for locals and visitors alike since opening in 2000. With its warm, wood-toned interior, expansive windows to the ocean, and walls dotted with surf memorabilia, the 6,000-square-foot restaurant and bar is reminiscent of a typical California surf shack.

Behind the restaurant lie the 1,200 square-foot Mavericks Beer Garden and on-site brewery, where hand-crafted, award-winning Mavericks┬« Beers & Ales are piped directly to the bar. The Mavericks Amber Ale won a bronze medal in the 2012 World Beer Cup, and the Ocho Barril Saison won Best in Show for session beers and the gold medal in the Wood/Smoke Ale category at the California State Fair in June 2013.