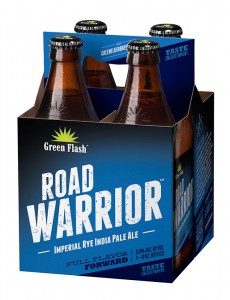 San Diego, CA — Green Flash announces the May 2014 national debut of Road WarriorÔäó – an Imperial Rye India Pale Ale that is brewed and named to pay tribute to the brewery’s tireless national sales team. The hoppy recipe was derived from a popular brew from the 2013 Hop Odyssey series (simply called Imperial Red Rye). This year, Road Warrior is being introduced for the first time as one of the brewery’s three “seasonal” offerings, with availability from May through August. With a bold flavor profile and 9% ABV, Road Warrior is not a typical summer release, but instead offers the consumer a quintessential “occasion beer” as an alternative to craft’s current lawnmower beer craze. True to form, Green Flash relentlessly champions the spirit of craft beer innovation and adventure with the release of a beer for summer that would be wholly satisfying in any season. Road Warrior represents the spirit of the Green Flash brand loyalist, as well as every craft enthusiast who refuses to settle for a bland, uninspiring session ale.

“This is quite possibly the most amount of flavor that can be packed into a glass of red ale,” explains Green Flash Brewmaster, Chuck Silva. “Columbus & Mosaic hops, rich crystal malts and a touch of spicy rye malt build a mildly sweet, tannic base for Mosaic & Amarillo dry hopping — 2lbs per BBL – to shine through in the beer’s firm finish. With layers of hop flavor and aroma, Road Warrior offers an amazing hop fruitiness that lends to the beer’s overall drinkability.”

“When we released Imperial Red Rye as part of the 2013 Hop Odyssey series, we were met with an overwhelmingly positive reaction from Tasting Room regulars as well as from fans across the country,” says Mike Hinkley, Green Flash Co-Founder and CEO. “Ultimately, our sales team pushed for the beer to be produced on a larger scale. They are a convincing bunch so we had no choice but to listen. We named the beer Road Warrior in their honor as a nod to the team’s tireless efforts spent pounding the pavement, and are extremely proud to add this exceptional beer to the Green Flash un-seasonal rotation in 2014.”

Green Flash beer is now available in 48 states (except Utah and Hawaii), and expects to reach all 50 states by the end of 2014. The San Diego-based brewery currently employs a (growing) team of 29 regional sales representatives who are based in key markets across the country. This high-spirited, motley crew of brand ambassadors (aka the road warriors) are a dedicated bunch who tirelessly hit the streets; traveling from town to town and pub to pub sharing the Green Flash experience with everyone they meet while they are on the road. Road Warrior is available in 4-packs of 12oz bottles, 22-ozers and on draft nationally wherever Green Flash is sold.

Green Flash Brewing Co., is located in San Diego, California, and was founded in 2002 by Mike and Lisa Hinkley. Brewmaster, Chuck Silva, leads brewing operations. Green Flash is an award-winning brewer of fine, hand-crafted ales, and specializes in brewing assertive and distinctive beers, such as the nationally acclaimed West Coast I.P.A.: an award-winning beer whose wide acceptance has helped define a category. Green Flash brews a wide variety of beer styles that are available on draft and in bottles as well as a growing lineup of seasonal and special offerings, including several barrel-aged beers, throughout the year. Please visit the Green Flash website www.greenflashbrew.com for more information.