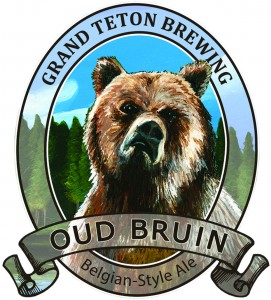 VICTOR, ID — Grand Teton Brewing, known throughout the West for exceptional craft brews, is proud to announce the release of Oud Bruin Belgian-Style Ale as the second installment of their 25th anniversary Cellar Reserve trilogy. A favorite style of the brewmaster, Oud Bruin Belgian-Style Ale was first brewed in 2007 as a tart, refreshing summer beer.

The sour brown ale was fermented with a Flemish blend of yeast and bacteria cultures, including Lactobacillus, Pediococcus, and Brettanomyces. Fermentation took six months at a warm cellar temperature for the culture to achieve the style’s characteristic quenching sourness. The beer is unfiltered, so flavor will continue to develop and become even more complex over the next two years in the bottle.
Because of its lactic and acetic sourness, this is a wonderful beer for cooking and pairing with food. Oud Bruin complements vinegary dishes such as salads or even pickles. Its flavors will enhance those of shellfish, liver, rabbit, and game birds like quail. The acidity of the beer tenderizes beef and is ideal for braising—try it in the classic Belgian Carbonade Flamande.
Oud Bruin Belgian-Style Ale is a one-time release available May 15, 2013 in 1/2 and 1/6 bbl kegs and bottle-conditioned 750 mL cases.
About:
Grand Teton Brewing was founded in 1988 as the first modern “micro” brewery in the state of Wyoming. Their premium microbrews include the 13x gold-medal-winning Bitch Creek ESB, the 2009 Great American Beer Festival Gold Medal Winner (American Pale Ale) Sweetgrass APA and the favorites of the Yellowstone and Grand Teton National Parks; Old Faithful Ale (pale golden), Howling Wolf Weisse Bier (hefeweizen) and Teton Ale (amber). From their production facility in Victor, Idaho, Grand Teton Brewing beers are handcrafted from only the finest ingredients, including locally-grown grains and pure Teton mountain spring water. Grand Teton Brewing is a green company utilizing environmentally conscious and sustainable practices whenever possible. Grand Teton Brewing is also the inventor of the modern glass growler, which is estimated to save a significant number of bottles and cans from entering the waste stream every year. Discriminating beer drinkers can find their favorite Grand Teton Brewing brews on tap and in bottles throughout California, Colorado, Idaho, Illinois, Kansas, Minnesota, Missouri, Montana, Nevada, North Dakota, South Carolina, South Dakota, Washington, Wisconsin and Wyoming.