VICTOR, ID — Grand Teton Brewing Company, known throughout the West for their exceptional craft brews, announces the release of 5 O’Clock Shadow Double Black Lager, the newest of their Cellar Reserve series. Join them Wednesday February 1st at their pub for the inaugural tapping of the first keg at none other than 5 o’clock. 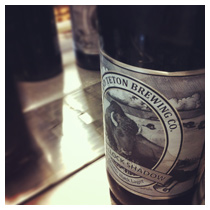 5 O’Clock Shadow Double Black Lager is brewed in the German Schwarzbier (black beer) tradition. Schwarzbier is to lager what stout or porter is to ale. Like those dark British beers, Schwarzbier has long been considered nourishing and even curative. German doctors often recommend Schwarzbier for nursing mothers. Our Brewmaster, born in Munich, was the beneficiary of just such advice.

We have taken the traditional Schwarzbier, intended to be a “session beer” with typically moderate alcohol, and almost doubled its strength to 7.6% alcohol by volume. We brewed our version with a fine balance of crystal and roasted malts and spiced it with noble hops. We fermented 5 O’Clock Shadow at cold temperatures with a select German lager yeast and cold-conditioned it for over four months to create a velvety smooth, easy-drinking springtime brew.

The 5’OClock Shadow marks the first ever black and white label from Grand Teton Brewing Company designed by our very own Kathleen Hanson. It is complete with its own QR code directing consumers to a homemade video about the brew.

This German lager pours a deep brown, almost black color with ruby highlights. It has soft dark chocolate notes with hints of caramel and a light roasty finish.

5 O’Clock Shadow pairs nicely with hearty, spicy foods. Try it with barbecued, roasted or blackened meats and sausages. Steaks and burgers, especially charred, will taste great. A cheese of choice might be a fine Munster or even a buttery, well-aged cheese like Gouda. For dessert we suggest a raspberry tart or ginger pear cake.