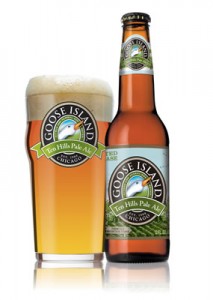 CHICAGO, IL — Goose Island Beer Company is celebrating the aroma and taste of hops with the introduction of Ten Hills Pale Ale, the first of three new limited release beers slated for this year and 2014.

Ten Hills Pale Ale traces its story to Bonners Ferry, Idaho’s Elk Mountain Farms, a hop farm that has been planting, growing and harvesting hops exclusively for Goose Island beers. Like the most important hop growing regions in Europe, Bonners Ferry is on the 49th parallel and offers an ideal climate and soil for hop cultivation. Today, Elk Mountain Farms is famous for growing hops of exceptional quality. Beginning with a planting of ten “hills” of hops two years ago, this relationship between farmer and brewer has developed to a point in which Elk Mountain Farms now grows more than 200,000 hills of hops for Goose Island annually.

“Idaho produces some of the best hops in the entire world and we’re incredibly excited to have such special access to that region,” said Brett Porter, Goose Island Brewmaster. “As craft beer drinkers’ palates shift toward hoppy beers, we want to highlight the creativity of the Goose Island brewing team and bring something distinctive to the drinker. Among craft beer connoisseurs, we’re already loved and lauded in the IPA style and these three new beers brewed with hops from Elk Mountain Farms will offer our fans even more to love from Goose Island.”

Ten Hills Pale Ale has an apricot and tangerine aroma, tasting of sweet honey and toast and finishes with an earthy, herbal hop character. Hopped with Perle, Cascade and Saaz, this pale ale rates at a 48 on the International Bitterness Units scale and comes in at 6.2 percent alcohol by volume. Beginning Dec. 2, Ten Hills Pale Ale will be available nationwide in six- and 12-packs of bottles and also on draught through March 2014. Under the supervision of Goose Island brewers, the beer is brewed at the Anheuser-Busch breweries in Fort Collins, Colorado and Baldwinsville, New York.

“More than ever before in our brewing history, we’re innovating at Goose Island,” Porter said. “Whether we’re creating a new hop-focused series of beers or further developing our barrel aging program. It’s an incredibly exciting time at Goose Island. I’m very proud of the new beers we are brewing with hops from Elk Mountain Farms and can’t wait to get our creations to craft beer lovers around the country.”

About Goose Island
Founded in Chicago in 1988, Goose Island is one of the most successful craft breweries in the Midwest and produces some of the most popular, and award winning, beers in the U.S. Since 1989, Goose Island beers have won a variety of awards at acclaimed beer events including the World Beer Championships, World Beer Cup, European Beer Star, World Expo of Beer and the Great American Beer Festival (GABF).