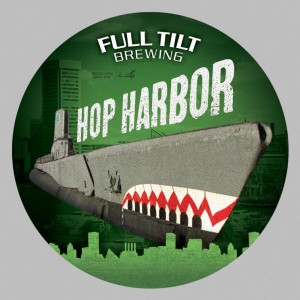 Canton, Baltimore, Maryland – FULL TILT BREWING is set to release their newest and one of their biggest offerings yet as founders, Nick and Dan, launch a beer of the Double IPA variety, HOP HARBOR. This beer launch event is open to the public.

Several other FTB brews will be on tap all evening with the event starting at 6pm and the pouring / toast of the first pint of HOP HARBOR taking place at 7:00 pm sharp. In addition to HOP HARBOR and Patterson Pumpkin on draft at all 3 bars (main, side, upstairs), Max’s will also have Baltimore Pale Ale, Fully Tilted Baltimore Pale Ale, Fleet Street Raspberry Wheat, and Berger Cookie Chocolate Stout on tap at the main bar.

Per the description on the bottle label, “Full Tilt Brewing’s HOP HARBOR is a brew for the Hop-Head in all of us. From the lineage of Simcoe and Nugget, Mosaic hops play the leading role in both flavor and aroma in this brew’s generous and complex hop bill. Balanced with a full body and an ABV of 8.3%, this Double IPA isn’t for the faint-of-heart and should not be taken lightly. Prepare for the experience. Embrace the revelation. Thank us later.”

Also worth noting, prior to HOP HARBOR’s launch that day FTB will be pouring their entire product line at the Brewer’s Association of Maryland’s (BAM) Brewers Harvest from 2-6pm with VIP entrance at 12pm. This event is located at the Bond Street Wharf in Fell’s Point. Reap The Bounty of actively supporting BAM by attending this craft beer and food sampling event. Enjoy Maryland’s finest beer amongst the cobblestoned streets and waterfront views in one of Baltimore’s most celebrated neighborhoods. In addition to Full Tilt Brewing, over 25 Maryland brewing companies pouring more than 150 unique, fresh and local craft beers, this event is not to be missed! Tickets for the Brewer’s Harvest can be purchased on Mission Tix here: http://www.missiontix.com/page/searchResults/?venue=Maryland%20Brewers. The HOP HARBOR launch following this event is free and open to the public.

FULL TILT BREWING comes from the background of not-cutting corners as its owners are passionate about every aspect of what they do. As it states on the opening page of their website, “Why do something half assed when you can do it full tilt?” and “Never slow down, never settle for less, and never be content with anything other than the best.” This newest addition to the FTB line of brews continues that mantra.