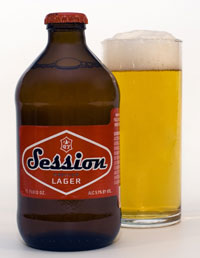 “We are very grateful for the support in voting Session Premium Lager as the Best Craft Lager beer. When we came up with the idea behind Session six years ago we felt that there was a place in craft beer for a balanced, refreshing all malt lager that was a celebration of the kind of pre-prohibition lagers America’s breweries used to brew. We are very happy to see that other craft beer drinkers think so too,” said Irene Firmat, Full Sail Brewing’s Founder and CEO.

“As an employee owned, independent brewery we have the opportunity to pursue our creative vision and Session was an outcome of that freedom. While all the market seemed to be trending toward extreme, very hoppy beers, we brewed a beer that went directly against that trend. And now six years after Session’s first release we are very gratified to see that we did create a beer that many others appreciate as well. Thanks to all The Full Pint readers and everyone who voted for Session — they keep brewing fun,” added Firmat.