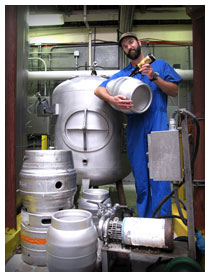 HOOD RIVER, OR — Full Sail Brewing turns 24 this month and to celebrate they will release a new beer in their Brewer’s Share line up: Dan’s de Familie Man Belgian IPA brewed by brewer, Dan Peterson.

“Dan’s de Familie Man is a Belgian IPA I present to you, as an interpretation of my family’s quest to the West bringing what I know from the East and a humble tribute to what we found here. Just over a year ago I awoke at dawn, left my wife and kids in a tiny Manhattan apartment and did battle with the streets of New York City by bicycle to my day job — brewing Belgian-style ales. While speeding over the 59th St. Bridge I was hit by a realization: there has got to be a better place to do all this. Two months later we arrived in Hood River in the foreign and mysterious land of Cascadia, a land of majestic splendor, wholesome living, and hops. In my daily explorations by bike I came across a clearing in the woods known as The Family Man where folks brought their kids and bikes and did not dodge taxis and delivery trucks but enjoyed the forest and life. And in the evenings I explored the Northwest hops in all their incarnations as IPA, Imperial IPA, and beyond,” said Dan Peterson.

Like a stop at The Family Man, Dan’s de Familie Man is best enjoyed with some friends and some family and no time restrictions. Smell it, taste it, belly laugh at your buddy who just “endoed” out of the pump track. Let it warm up a bit, and taste it again. There is a lot going on in there so take some time to explore. De Familie Man pours crystal orange and supports a sturdy off-white head. Fresh peach, mango, papaya, and passion fruit aromas dominate the nose. Upon tasting, these tropical fruits crescendo to a point of perceived candy sweetness and the heat of 7.8% abv. At this moment, the hops take hold. A generous addition of Styrian Goldings, Amarillo, Simcoe, Saaz, and Crystal hops to the whirlpool contribute a spicy and coniferous juniper / pine bite. The finish is clean and abrupt leaving a nice touch of hop bitterness and a hint of candied fruit. (IBU 50)

Full Sail has scheduled two “Meet the Brewmaster and the Beer” events to showcase this new beer. The first Meet Brewmaster and the Beer event will be at Full Sail at Riverplace in Portland, Tuesday, September 27th from 5:00 — 6:30PM. The second is at the Full Sail Tasting Room and Pub in Hood River, on Thursday, September 29th from 5:00 to 6:30PM. Join the Full Sail crew to celebrate and toast a pint of this new brew.

With each Brewer’s Share series beer, Full Sail picks a local charity to receive a portion of the proceeds from the sale of the beer. Dan has chosen to support the Hood River County Library Foundation and every keg of Dan de Familie Man benefits this volunteer organization. The Hood River County Library Foundation supports and enhances existing library services while funding an endowment to insure a quality library system for future generations of county residents.

The Brewer’s Share series is a line-up of small batch draft beers where each Full Sailor takes a turn hand-crafting their own single batch recipe and a portion of the proceeds benefit a local charity of their choosing. Full Sail’s Brewer’s Share beers will only be available on tap at Full Sail’s Tasting Room and Pub in Hood River, Oregon, and at Full Sail’s Brewery at Riverplace, in Portland, Oregon. Growlers to go are available. Dan de Familie man will also be featured at the Hood River Hops Fest on October 1. The next Brewer’s Share will be brewed by Assistant Operations Manager, Dan Nakamura and is expected in early 2012.