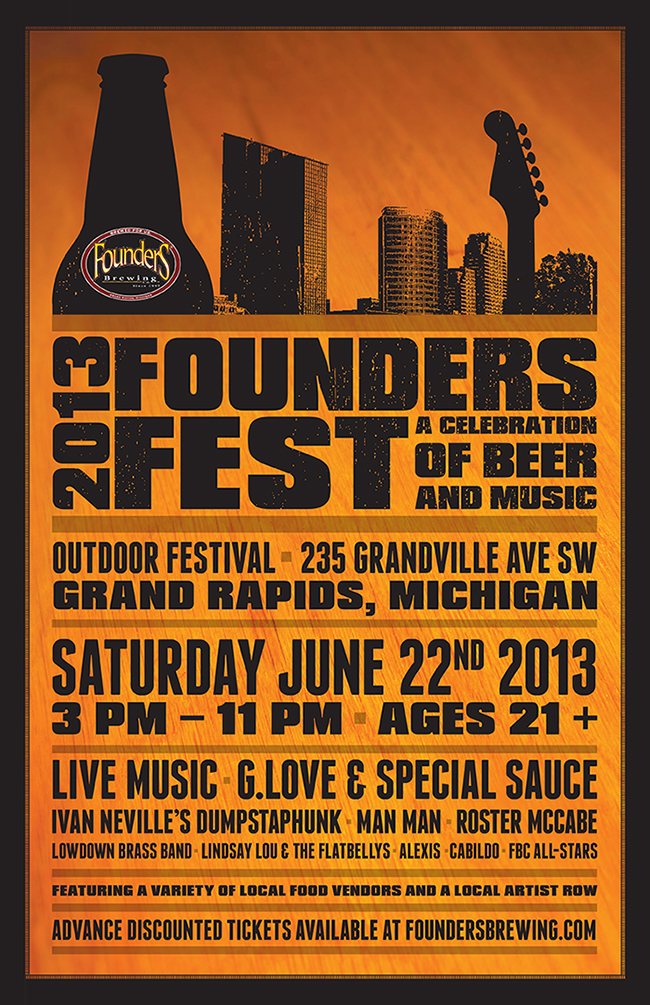 GRAND RAPIDS, MI – Founders Brewing Co. announced today that they plan to host Founders Fest 2013 on the streets of downtown Grand Rapids once again, from 3-11pm on Saturday, June 22. This is the brewery’s sixth annual outdoor festival celebrating two of the things they love most: beer and music. Founders is expecting 6000 or more beer and music lovers to gather on Grandville Avenue between Cherry and Bartlett for the festivities.

“Founders Fest is our biggest party of the year,” said Mark Dorich, Festival Coordinator and Founders Director of Retail Operations. “It’s always a great time celebrating with our community, and we’re really excited about this year’s music lineup.”

A wide range of musical talent will be rocking out at this year’s Founders Fest, with national act G. LOVE & SPECIAL SAUCE coming in from Philadelphia, PA, with some hip hop/blues to headline. Other performers include IVAN NEVILLE’S DUMPSTAPHUNK with funk from New Orleans; MAN MAN, also of Philadelphia; electro rock from Founders taproom repeat performers ROSTER MCCABE of Minneapolis; horn-driven tour de force, Chicago’s LOWDOWN BRASS BAND; and bluegrass sweethearts LINDSAY LOU & THE FLATBELLYS of Ann Arbor. Hometown crowd favorites ALEXIS join local Latin rock crew CABILDO, and a super-group of Founders employees return as the FBC ALL-STARS to round out the entertainment line-up.

This year’s event will again feature local food vendors as well as a Local Artists Row, which showcases the various works of some of the area’s finest artists and designers. There will be other strolling and surprise entertainers sprinkled throughout the day. And, of course, there will be plenty of beer available, including Founders year-round offerings and quite a few taproom one-offs. The entire festival will be outdoors on the street; the indoor taproom space will be closed for the day.

Founders Fest is a celebratory “thank you” to Grand Rapids and West Michigan for min thaking Founders what it is today. Founders Brewing Co. has been a part of the Grand Rapids scene since 1997 and has grown its brewing tradition from modest beginnings to being one of the highest rated breweries in the world.

“We look forward to Founders Fest every year,” said Co-Founder & CEO Mike Stevens. “Beer and music bring people together, and we love being able to put on an event that does just that. It gives us the opportunity to get our family, friends and community together for a day so that we can toast to all of them.”

Founders is also partnering with The High Five Program, a local community organization that assures the prevention of litter and significant reduction of waste streams at large-scale events, for the second year. They managed to achieve over 90% waste diversion last year and hope to beat that rate this year.

Guarantee yourself entry to Founders Fest 2013 and save a little cash with advance pre-sale tickets:

Discounted advance ticket sales will again be available starting Friday, April 19, at the Founders taproom, as well as online, via foundersbrewing.com through http://foundersfest2013.eventbrite.com/. The event is limited to ages 21 and older.

Established in 1997 by two craft beer enthusiasts with day jobs and a dream, Founders Brewing Co. has made a distinctive mark on the craft beer community by brewing complex, in-your-face ales, with huge aromatics and tons of flavor. Founders is one of the fastest-growing craft breweries in the nation, currently ranking among the top 50 largest craft breweries in the U.S. The brewery has received numerous awards from the World Beer Cup and the Great American Beer Festival, and its beers are often rated among the best in the world by RateBeer and BeerAdvocate users. Located in downtown Grand Rapids, Michigan, Founders is a proud member of theMichigan Brewers Guild and the Brewers Association. For more information, visit www.foundersbrewing.com.