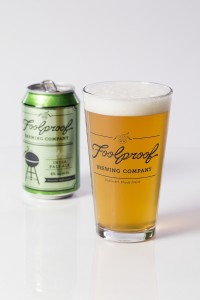 “We are thrilled to begin distributing our beers to another one of the great states of New England,” said Nick Garrison, Foolproof’s president and founder. “Partnering with the New Hampshire Craft Alliance’s experienced and reputable team, we look forward to introducing the Foolproof brand to beer lovers across the Granite State.”

“Foolproof Brewing Company has been very creative in their approach in brewing beers that represent the New England lifestyle,” said Sean Jansen, manager of the New Hampshire Craft Alliance. “Whether it’s sitting on a barstool, working in the back yahd, or waiting for the rainclouds to pass, Foolproof has a beer for you. Their passion and drive to produce high-quality beers will resonate very well in New Hampshire.”

Foolproof Brewing Company (www.foolproofbrewing.com) in Pawtucket, Rhode Island, produces high-quality, hand-crafted beers designed with specific experiences in mind. Whether it be watching a baseball game, sitting at home on a rainy day, or just catching up with friends at the local pub, Foolproof’s goal is to create unique and fulfilling beer experiences. Launched in January 2013, Foolproof is one of the newest craft breweries in Rhode Island, and the company has been steadily increasing its distribution footprint. Foolproof’s beers are also distributed statewide in Rhode Island, Massachusetts, Connecticut, Vermont, as well as in Dallas, Texas.

The NH Craft Alliance (NHCA) was formed in 2009 to enhance the craft capabilities of the group and to provide a single-point-of-contact distribution network that services the entire State of New Hampshire. The four distributor members — Bellavance Beverage Co., Clarke Distributors, New Hampshire Distributors and White Mountain Distributors — share a uniform mission of bringing the best craft beer education, service, promotion and brand building to the NH marketplace. Anchored by operations and dedicated employees in four key communities around the state, the Alliance provides grass-roots level access to markets that is unrivaled in New Hampshire. To learn more, visit us on the web at www.nhcraftalliance.com.