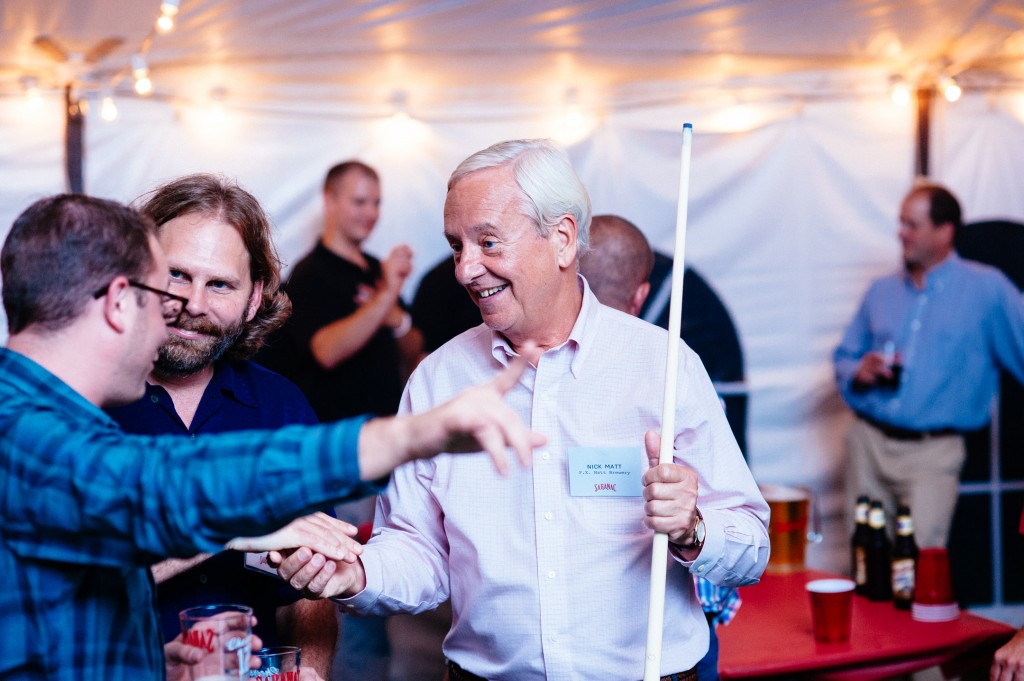 UTICA, N.Y. — Food, friends and foosball are just a few highlights of the festivities found at the F.X. Matt Brewing Company’s 125th Anniversary Distributor Celebration this past week.
On Thursday, September 12, F.X. Matt Brewing Co. hosted nearly 200 integral members of the Saranac selling team for a celebration that eventually took over Varick Street — the district surrounding the brewery. Guests included principal owners, management and sales representatives from distributors ranging from Maine to the Carolinas.
“We had a hopping hell of a time celebrating 125 years of great brewing heritage,” said Mike O’Malley, VP of sales and marketing for DeCrescente Distributing Co., Saranac’s Albany area distributor. “The night was kicked off by a 5-course beer dinner that included comments from not only Nick, Fred and the brewers, but also the chefs who paired each course. The night was capped off by a visit to the future site of the brewery’s outdoor beer garden where people engaged in great conversations of old memories and stories about how far the brewery has come in the last 125 years. Cheers to the Matt Family and many more years to come!”
Along with the 5-course gourmet dinner and stories of the brewery’s past, guests enjoyed an exclusive sneak peek into innovative new products and processes, and samplings of special brews such as Saranac West End IPA — a limited release brewed in the company’s pilot brewery.
“Some of these people and companies have supported us for a very long time,” said company President Fred Matt. “Our priority for this event was to not only show them how much we value them, but also to remind them of all the innovative and distinctive ways we plan to delight our consumers.”
Following the on-site party, guests flooded Varick Street to attend Saranac Tour 125 parties at neighboring establishments including Celtic Harp, Nail Creek, BLU, O’Donnell’s, Sickenburger, Shots, Stiefvater and The Varick.
“We as a family are proud to have reached this milestone and we’re happy to have had this opportunity to celebrate it with our distributor partners,” said chairman Nick Matt. “We really appreciated so many of our distributors coming so that we could thank them for their hand in helping us reach our 125th anniversary. To me, seeing them and just saying ‘thank you’ was the best part. We wouldn’t have made it this many years without their help. All in all, it was a great evening.”
Celebrate with us. Use #Saranac125 and connect with F.X. Matt Brewing Company and Saranac on Facebook (facebook.com/Saranac), Twitter (@SaranacBrewery), and Instagram (@SaranacBrewery).
About F.X. Matt Brewing Company
F.X. Matt Brewing Company in Utica, N.Y., was founded in 1888. Today, under the leadership of the third and fourth generations of the Matt family, the brewery is celebrating 125 years of brewing. Through a commitment to innovation and brewing excellence, the company has earned a reputation as one of the country’s most respected brewers of craft beers, including the Saranac line. In each bottle of Saranac, you’ll find exceptional quality, distinctive ingredients and a refreshing twist on tradition — the signature of the F.X. Matt Brewing Company.