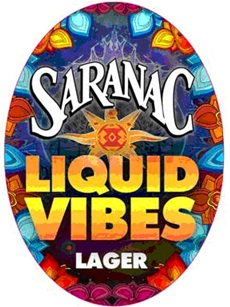 UTICA, NY- Looking for a better vibe this summer? The F.X. Matt Brewing Company found it for their latest sponsorship: Gathering of the Vibes Music Festival in Bridgeport, Connecticut.

They got the perfect feeling from this one, and partnered with the Vibes to create an exclusivebrew to be served at this year’s event. Saranac fans and members of the “Vibe Tribe” were asked to help name the beer, and the suggestions and votes came flowing in. The overwhelming winner was Saranac Liquid Vibes.

The new official beer of Gathering of the Vibes will be a refreshing lager, perfect for this laid-back summer event. Saranac Liquid Vibes will be sharing space in the beer tent with Saranac IPA andSaranac Summer Ale.

Gathering of the Vibes began in 1996 as a celebration of the life of Jerry Garcia, who had passedaway the previous summer. In its 16th year, Vibes has grown into a four-day festival that has featured such world-class talent as Crosby, Stills and Nash; all living members of the Grateful Dead; the Allman Brothers Band; James Brown; the Black Crowes; Buddy Guy; Jimmy Cliff; Primus; George Clinton and P-Funk; Bruce Hornsby; Les Claypool; and many, many more big names, while continuing to showcase extraordinarily talented, young, up-and-coming bands.