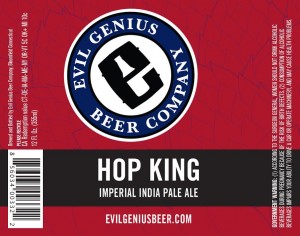 Pennsylvania The idiots behind Evil Genius are proud to announce the release of Hop King Imperial IPA. This ale is brewed with Pale and Crystal malts and hopped with Warrior, Simcoe, Citra, and Amarillo. It clocks in at 8.1% ABV and hits 96 IBUs.

Hop King is a delicious hop forward IPA, and the first from the new Imperial Series by Evil Genius. Crisp and clean bitterness from the Warrior hops evolves into to a citrus lovers delight with grapefruit aroma and flavor. A beer for hop lovers everywhere.

The brewers will officially introduce Hop King Imperial IPA at Barcade Philadelphia – 1114 Frankford Ave, Philadelphia, PA, on February 13th at 4pm. Trevor and Luke will be on hand to talk about the new beer and answer questions about the recipe development and brewing process. Several other Evil Genius beers will also be available on draft.

This beer will be debut in cases and draft in early February in the following markets; Baltimore, North Eastern Maryland, Philadelphia, York, Reading, Scranton, The Lehigh Valley, Delaware, New Jersey, and Massachusetts. Please call your local distributor for availability.

About Evil Genius:
Evil Genius was founded by friends and craft beer lovers Luke Bowen and Trevor Hayward while they were attending graduate school. Realizing their job prospects were grim due to the recession, they decided the best way to take over the world was through craft beer. Launched in 2011, Evil Genius is now sold through 13 wholesale partners in five states. For more information, please visit evilgeniusbeer.com. Mwahaha!