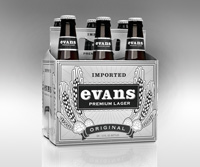 ANAHEIM, CA. – Evans Premium Lager, the upstart craft beer company that produces Evans Original, Evans Black and Evans Light lagers, is now on a level playing field with breweries with many more years of experience under their belt.

Having won another award on May 5th, 2012, this time a prestigious 2012 World Beer Cup┬« Silver award for their Evans Original in the American-Style Premium Lager or Specialty Lager category, the Evans brand is not only making points for its aggressive marketing strategy in SoCal, but now for international peer acceptance of the quality of their beers.

Gold, Silver and Bronze awards in the competition’s 95 beer-style categories were presented during the World Beer Cup 2012’s Gala Awards Dinner presented by the Brewers Association, at the Town and Country Resort in San Diego, CA.

“Winning a 2012 World Beer Cup┬« Silver is a dream come true!” Evan Rapport, co- founder of Evans Premium Lager was quoted, as he savored the taste the third accolade for the Evans brand in 2012.

Only 24 years old, Evan Rapport may be one of the youngest to win a 2012 World Beer┬« Cup Silver award. In a field crowded with 3,921 worldwide entrants and 524 entries from California alone, Evans Lager was one of two OC’s beers to win awards. “Evans Lager has been in the beer business less than 2 years; this is an exceptional feat.” beamed Evan Rapport, the namesake of the beer.

The Evans brand’s 1st victory of the year was on March 1st, 2012 with a win for their Evans Black in the U.S. Beer Tasting Championship where they garnered “Best Dark Lager in California”. A total of 435 beers from 134 breweries beers were in that completion.

And on April 16th, 2012 they earned their 2nd victory of the year at the Denver International Beer Competition, where the Evans Original won a Bronze Medal for Light Lagers / Ales.

Evan Rapport admitted that the first two victories went unnoticed. “We were just too busy to check the results. But the World Beer Cup┬«; that was a competition we could not miss.” reported Evan Rapport.

When asked “What is up next for the Evans Brand?” Evan Rapport replied “There is nothing stopping us.”

Tres Hermanos LLC owns, produces and markets the Evans brand in Orange, LA, Riverside and western San Bernardino Counties. The Evans brand is distributed in San Diego County by John Lenore, in Northern LA County to Ventura by Alliance Beverage Partners, and in Palm Springs and the high desert by Trent Beverage.