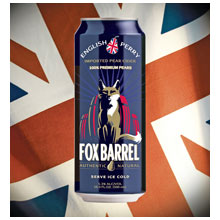 Fox Barrel Perry is an untraditional but authentic interpretation of pear cider-making, inspired by an uncommon cider style that originated in the British Midlands.

100% pressed and naturally fermented in England. Made with only premium pears, smoothed with pure pear-juice. No added flavors, colorants, malt, spirit or flavored hard apple-cider. No sorbate or benzoate preservatives.

Slightly cloud and alive with natural pear flavors and complexity. Lightly sparkling, fresh straw in appearance with a natural semi-brilliance.

“American cider drinkers are adventurous souls, and they like to explore and are fascinated by both tradition and pioneering personality,” said Joe Heron, President & CEO, Crispin Cider Company. “Our English Perry shares this dichotomy — it’s a classic but quite unlike what has been before.”

About the Crispin Cider Company

Crispin and Fox Barrel ciders are all Gluten Free for the gluten intolerant.

The company is based in Chicago, IL & Colfax, CA.