After more than three decades in the beer industry, Carol Stoudt plans to retire in the spring and cease brewing operations at her namesake brewery in Adamstown, Pennsylvania.

Speaking to Brewbound, Stoudt said retirement had been on her mind for about two years. She added that her adult children had encouraged her to hang up her brewer’s boots. After spending the Christmas holiday with her children, Stoudt said she decided to forgo plans to begin canning the brewery’s beer and call it a career.

“I got together with a few people from my team and just pointed to the calendar and said, ‘This is it,’” she explained. “It’s a very, very difficult decision.”

Stoudt founded Stoudts Brewing Company in 1987 on the grounds of her family’s restaurant, Stoudts Black Angus Restaurant and Pub. That year, there were 150 breweries in the United States. In the 33 years since, that number has ballooned to nearly 8,000 breweries, creating an increasingly competitive industry and added headwinds for legacy breweries.

In a time when it can seem that beers have to be brewed with baked goods, breakfast cereals or other novelty ingredients to gain consumers’ attention, Stoudt maintains that “glitter does not belong in beer.”

In 2018, Stoudts produced 2,400 barrels, according to the Brewers Association (BA). In announcing plans to cease brewing operations at the start of spring, the company conceded that it was not “moving enough volume to justify the expense of keeping the brewery open.”

After growing up in a teetotaling family, Stoudt became enamored with beer during her honeymoon in Germany with her beer-loving husband, Ed. It was a pilsner at Augustiner-Bräu, specifically, that sparked her imagination.

“It took seven minutes to pour, and I thought, ‘Wow this beer has a nice, creamy foam head on it.’ I loved the elongated glass,” she recalled. “It really had so much flavor compared to what I thought of American mass-marketed lagers.”

There wasn’t a straight line from the beer gardens of Munich to GABF, however. After their honeymoon in Germany, Carol and Ed settled in Adamstown.

“I didn’t think about beer too much,” she said. “I raised five children, and when my youngest was ready to go to kindergarten, I thought, ‘What do I want to do with my life? Do I want to go back to teaching?’ I was a kindergarten teacher. I have a master’s in early childhood education. ‘Or do I want to do something to support my husband’s business?’”

Although Stoudts Black Angus Restaurants had a full-service bar, the Stoudts found it difficult to procure the beers they were so fond of from Germany. The couple decided to make the restaurant into a brewpub. However, as a liquor license owner, Ed couldn’t own a stake in an alcohol-producing entity. So the businesses would have to be kept separate. The brewery was Carol’s.

After getting into the industry, Stoudt along with fellow Keystone State brewers helped form the Brewers of Pennsylvania to lobby for legislative changes, such as the legalization of brewpubs.

Stoudt cited her friendships with industry colleagues as one of her favorite things about her journey.

“It’s been thirty-some years of meeting some of the most fabulous people in the world, just caring about making fabulous beer,” she said.

“I never went to brew school, because I had children,” she said. “My learning was by visiting a lot of brewers, by Karl’s mentoring, Greg Noonan’s mentoring. And then I started brewing on my 15-barrel system.” 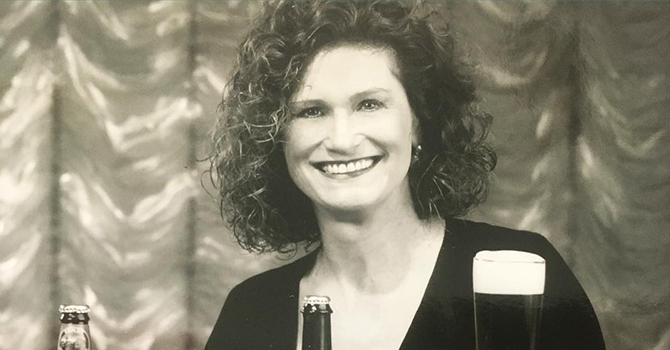 Another career highlight for Stoudt was helping educate consumers. Beginning in 1988, she hosted beer festivals at her husband’s restaurant and beer garden, where founders and brewers of pioneering breweries poured samples and chatted with guests.

“I had the first micro-festival, and I invited the then existing craft brewers. And who were they? Great Lakes, Goose Island, Harpoon, Sam Adams, David Geary, Weeping Radish,” she said. “People who were involved in either making or selling the beer were there, giving little samples of beer, talking about the beer and that really was good education.”

With the news of her retirement, the leader of a band that performed at those early festivals reached out to the brewery team about returning to play for Stoudt. That idea blossomed into the planning of a last-hurrah festival scheduled for April 11, Stoudt said.

Asked what advice she would offer would-be brewers today, Stoudt cautioned them to pump the brakes.

“I would pause for maybe two to three years,” she said. “Let the industry just kind of settle out because it’s a little bit volatile.”

As for her plans to retire, Stoudt said she’s keeping her two-barrel brewhouse at the restaurant and will continue brewing batches that will be served on site.

“I’m definitely not going to knit or crochet,” she said with a laugh.