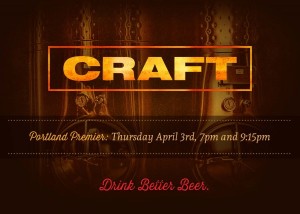 The latest film from Craig Noble follows him on a coast to coast journey that includes an apprenticeship at a farm brewery, beer schooling in Vermont that lead to Cicerone certification and the development of his farmhouse ale recipe. Inspired by the double digit growth of the craft brewing industry, Noble takes a look at how breweries are taking on the task of maintaining the quality, creativity and integrity expected by thirsty beer connoisseurs.

Noble will be in attendance for the Portland launch, with screenings at 7:00 and 9:15 pm, and doing post-show Q&A sessions. As part of the film’s sensory experience his farmhouse ale, brewed locally at Coalition Brewing, will be available for purchase along with beer from The Commons Brewery, which is featured in the film. Tickets are $10 and can be purchased through the Hollywood Theatre.

Following the Portland premiere, the film will continue the western tour with stops in Denver, Fort Collins, Austin, Oakland and San Diego through the month of April. The eastern tour begins June 4 in New York and wraps up June 26 in Vancouver, BC.

CRAFT Official Trailer from Pixel One Productions on Vimeo.