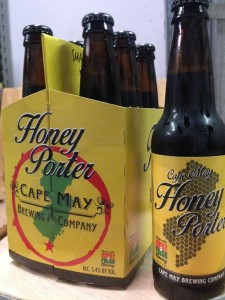 CAPE MAY, N.J. — Is there such a thing as Jersey Fresh beer? There is now that Cape May Brewing Co. is officially the first brewery to carry the “Made with Jersey Fresh” label for its Honey Porter beer. The beer is described as roasted with dark crystal malts that shine through in a smooth and light-bodied porter that is balanced by a hint of sweetness thanks to the local Jersey Fresh honey. The brewery gets its honey from a local South Jersey supplier and will use different varieties depending on the season including blueberry, butterbean, clover, and wildflower honey. “Each variety has its own subtle nuances, so it’s nice that the flavor profile can change with the seasons,” remarked Chris Henke, co-owner.

To make a batch of Honey Porter, the brewery goes through a lot of honey. Usually a pound of honey for every five gallons and they typically make 500 gallons at a time. Using local honey is not the most affordable option, but using fresh, local ingredients is important to the brewery. “We are a part of the fabric of our community and using local ingredients represents our commitment to New Jersey. Using South Jersey honey is exciting because it tells a story about the beer and about who we are as brewers,” said Ryan Krill, co-owner. In addition to using local ingredients, they also give their spent grain to local farmers.

The brewery had to go through an application process and an onsite inspection to get approval to use the Jersey Fresh logo. “ We are very happy working with them and look forward to having more Jersey Fresh beers in the future,” said Robert Krill, co-owner who was present for the inspection process.

You can sip on the Honey Porter at many of the on tap locations in New Jersey and Pennsylvania. The brewery recently started bottling and distributing in the South Jersey area. Beginning in the New Year, you can buy bottles of the local Honey Porter throughout New Jersey. You can visit the “Beer Finder” section of capemaybrewery.com to find locations near you.

The brewery, which is located on the grounds of the Cape May County airport, opened in the summer of 2011. It offers a wide selection of beers on tap from Sours and Belgians to a wide range of IPAs as well as all-natural sodas and craft beer vinegar. You can see how the beer is made or sample some beers by visiting the taproom, which is open seven days a week from 12-8PM. For more information, visit capemaybrewery.com.