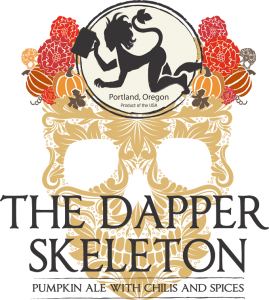 Portland, OR – Burnside Brewing Co. has just introduced a new fall seasonal in bottles – The Dapper Skeleton – a traditionally un-traditional take on the popular pumpkin beer trend. Available now on draft and in 22oz bottles only in Oregon, The Dapper Skeleton is a spicy pepper infused pumpkin ale from the GABF gold medal winner of pepper beers.

Known for taking un-traditional approaches with classic styles like Burnside’s Lime Kolsch as well as for his ingenious pepper beers like Sweet Heat (GABF Gold winning Apricot and Scotch Bonnet Pepper Wheat), Brewmaster/Co-Owner Jason Mcadam added a trio of chili’s, cocoa nibs, a secret blend of spices and a touch of Cherrywood Smoked Malt. The Dapper Skeleton will leave pumpkin beer fans clamoring for more and skeptics rethinking the style.

The Dapper Skeleton is available NOW in 22oz bottles and 50L kegs through Maletis Beverage.