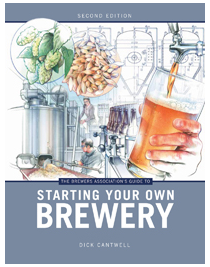 Boulder, CO — New breweries are popping up across America nearly every day, but that doesn’t mean that the craft brewing industry is easy to break into. Brewers Publications is pleased to announce an updated release that will help those seeking to start their own brewery: The Brewers Association’s Guide to Starting Your Own Brewery(Second Edition) by Dick Cantwell.

A veteran in the craft brewing community, Cantwell is a pioneer of Seattle brewing and head brewer at Elysian Brewing Company, which has three pub locations and a production facility. His extensive background in founding brewpubs informs his approach to this new revision that will help others build flourishing craft breweries from the ground up. The Brewers Association’s Guide to Starting Your Own Brewery (Second Edition) is an indispensable resource. Using many thoughtful questions, Cantwell mentors readers to help them discover and define their direction. Subsequently, he walks them through the preparation and execution required to open a brewery, from start to finish.

“Planning and opening a thriving, quality-oriented brewery is hard work but completely achievable with the right guidance,” said Cantwell. “At a time when the industry is booming and more breweries are emerging, I’m thrilled to be able to share my experience and help fellow brewers start on the right foot. The updated edition gets readers thinking about what’s important and provides practical advice that will help turn any craft brewing dream into a reality.”

This must-have, comprehensive how-to guide adeptly covers everything from ingredients, financing, business plans and quality assurance to distribution, wastewater, sustainability and more for prospective brewpub and packaging brewery owners alike. Cantwell also discusses how to make business ideas stand out from the rest by including a sample business plan, beneficial for brewers of all levels. Armed with this outline of what works and what doesn’t, brewers will discover the necessary considerations for all stages of the process to start a successful venture.

“I am certain any aspiring commercial brewery in the planning phase—or small brewery looking to grow—will find useful lessons in every chapter Dick has written,” said Sam Calagione, founder and president, Dogfish Head Craft Brewery in the guide’s foreword. “This book is written from a true brewer’s perspective.”

Brewers Publications supports the mission of the Brewers Association by publishing books of enduring value for amateur and professional brewers as well as titles that promote understanding and appreciation of American craft beer. With over 50 titles to choose from, it’s the largest publisher of contemporary and relevant brewing literature for today’s craft brewers, homebrewers and beer enthusiasts.

The first edition of The Brewers Association’s Guide to Starting Your Own Brewery came out in 1996. To view a behind the scenes interview with Cantwell on the new edition, please click here.