Editor’s Note: Isaac Arthur and Cody Fague of Indianapolis, Indiana-headquartered design firm CODO Design have returned to Brewbound Voices with a four-part series on rebranding considerations for craft breweries. Arthur and Fague will share excerpts from the firm’s new book, Craft Beer, Rebranded, and its companion workbook over the next four weeks. This week, Arthur introduces the series, and over the following three weeks, he and Fague will dive into the decision making process, as well as how to ramp up and roll out a rebrand or refresh. Look for the columns to appear on Brewbound.com throughout the month.

Hello, Brewbound! My name’s Isaac Arthur and I’m a partner at CODO Design. We’ve got a new book out called Craft Beer, Rebranded (craftbeerrebranded.com), and are excited to partner with Brewbound to give you a few excerpts from the book, and its companion workbook that will help your brewery rebrand (should you be considering it).

Why would you consider rebranding your brewery? Let’s look at some numbers. In the year 2000, there were about 1,500 breweries in the United States. In 2010, that number grew to around 1,800. Then, everything changed. More than 6,000 breweries opened over the next 10 years, with the total U.S. count cresting at around 8,000 breweries at the start of 2020. Once novel, craft beer has become mainstream, claiming a sizable share of the U.S. beer market, accounting for 24% of sales and a little more than 13% of volume in 2019, (and it continues to increase even as the overall beer category loses share of alcohol drinking occasions to spirits and wine and faces increased competition from cannabis).

CODO was fortunate to stumble into the beer branding world as this boom was starting in 2010. A decade ago, most of our work was with startup breweries. Branding and positioning breweries in planning in those days was pretty straightforward. They were small, personable, hyper-local, and the beer was fresh and innovative (a Black IPA, whaaa?). We got to know them, their market, and what sort of mark they wanted to make on the world. And then we told that story through beautiful design. 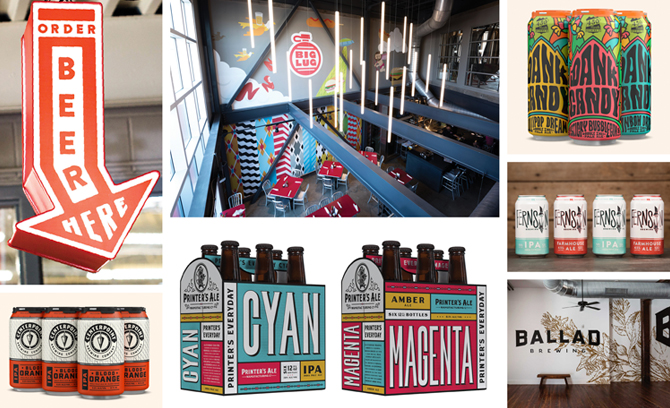 Some of our early brewery branding work.

After seven years and nearly 50 of these projects across the country and around the world, our work started shifting from breweries in planning that were looking to build their brand for the first time, to established breweries wanting to rebrand (some due to increased competition from some of the successful upstarts that we had branded along the way). As more breweries opened, sometimes on the same block in some markets, concrete positioning and differentiation became harder to achieve. It also became more valuable.

At first, we would rebrand breweries that had only been open for a few years. In many of these cases, these breweries had yet to build any real brand equity. Then, we started working with breweries that had been open for six or seven years. Then a few that had been around for 10 to 15 years. Before too long, we were working with some of the oldest and most respected outfits in the country. Each of these projects came with a new set of contexts and challenges. Now, we weren’t just reworking a logo or revamping packaging, we were riding along with wholesalers to see what their competitive set looked like and helping legacy breweries transition from bottles to cans. We were discussing national go-to-market launch campaigns for a new SKU, while at the same time figuring out how to best educate sales people, front-line deliverers and taproom managers on a newly refined brand story. We were helping to clarify a story that, in many cases, even the founders of the brewery themselves had a hard time articulating.

There has been a through line in all the brewery rebrands we’ve handled — a concern that we’ve heard brewery owners around the world echo: “How do we retain our brewery’s hard-earned brand equity and reputation while modernizing its look and feel? How do we speak to, and build upon, all the visuals that people know, love and associate with our brewery, but set ourselves up for the next stage of our business’ life?” We call this push-and-pull concept “Evolution vs. Revolution,” and it’s one of the most important things to consider as you set out to rebrand your brewery.

Our latest book, Craft Beer, Rebranded (craftbeerrebranded.com), attempts to answer this question. The market has shifted and increased competition, from small outfits and Big Craft alike, has created a more educated and fickle consumer base. Add to that an ever-changing sales and distribution environment, and breweries around the country are finding that they need to update their branding not just to clean up their presentation, but to stay relevant and competitive.

And we’re excited to give you a condensed look at the rebranding process. In this three-part series, we will pull from our book and share real world examples of subtle brand refreshes, sweeping, revolutionary overhauls and everything in between. Part 1 will cover some criteria for when you should (and shouldn’t) rebrand. Part 2 will cover how to weigh your brand equity with a brand audit. Part 3 will cover how to roll out your rebrand.

Then, to get your team thinking about which approach could work for your brewery, we’ll include a few activities and prompts pulled directly from our Craft Beer, Rebranded companion Workbook that you can complete yourself.

Stay tuned for next week’s post, The Meaning & Value of Rebranding.

Craft Beer, Rebranded (and its companion Workbook) are available to read and purchase at craftbeerrebranded.com. If you’d like to discuss this book in person, CODO will be presenting a seminar titled, “Using Science to See What Packaging Works and How Your Brewery Can Sell More Beer,” at the 2020 Craft Brewers Conference in Texas.