Legalized marijuana is burning the craft beer business, according to Vivien Azer, Cowen and Company’s managing director and senior research analyst specializing in the beverage, tobacco and cannabis sectors.

Speaking at the Brewbound Session today, Azer’s was just one of several voices that discussed a craft beer business that has experienced a decade of wild growth but has slowed in the past 18 months.

Marijuana, which is now legal for recreational use in eight states and available for medical use in many more, was the most-discussed challenge, and the one Azer focused on. But speakers also pointed to aging consumers and other obstacles throughout the day. In states where marijuana has been legalized, use increases, especially in the 26 and older age group. And even more so among men. Meanwhile, alcohol usage decreases, she said.

Azer suggested brewers “double down” on Hispanics and women, who show lower use of cannabis — especially women — to win their business. Other speakers pointed to those demographic groups as being underdeveloped markets for craft as much as they might be for marijuana.

“You have to embrace female consumers, and how you talk to her,” Azer told a room of about 200 industry professionals. “It can’t be the bikini-clad girl from the 1980s. That doesn’t work.

“You guys are going to have to figure out a way to make up with disenchantment that some bigger players made in the 1980s,” she added.

Azer pointed to styles that are easier on the palate and more fruit forward as ways to reach female drinkers. 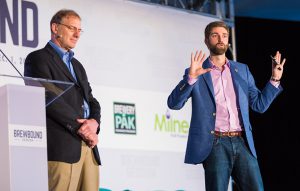 In a separate presentation, Brewers Association chief economist Bart Watson agreed that women provide a key to growth strategies for breweries. Watson provided a potential roadmap to a new growth strategy that would reach female drinkers, a group that indexed better than men in four styles of beer: sour/American wild ales, fruit/vegetable/pumpkin; herb; and shandy /radler.

“Engaging new people is going to require thinking about styles in different ways and engaging people in new ways,” Watson.

“We are moving to a period of slowing growth,” Watson said. “But even flat markets still have growth.”

“It’s just a slow, gradual maturation of the industry,” Jones added. “The craft index is still positive; it’s just not as strong as it was in the past.”

Of note, craft beer orders peaked in July 2015, with only a little rebound in the first half of 2016. However, the higher levels couldn’t be sustained, and that has signaled concern.

“People are more likely to buy beer once they’re offered tours,” Watson said. “So invest in your tours, invest in your tasting experiences. I don’t think you’re going to drive people back to the old way.”

Taproom business continues to be a bright spot for breweries. Through the first three quarters of the year, breweries had already surpassed 2015’s total of barrels for use by the breweries themselves, Watson said.

“It’s quite possible we will get to 2.5 million barrels sold directly at breweries and brewpubs,” Watson said.

“You can’t fight what people want,” Watson said. “So think less about driving them back to the bar and create brand engagement where people are drinking now.”

Another positive for the beer industry: Shrinking household sizes, an aging population and the decrease in the birth rate.

“That’s why it’s going to be a good time to be in the beer industry in the next five years,” Jones speculated of a generation with more disposable income to spend on luxuries such as beer, wine and chocolate. The numbers were slightly different, however, with regard to age cohort consumption. While wine use remains consistent across age group, beer usage tends to decline as consumers get older. It remains to be seen if the millennials drinking craft beer now will stick with it, Watson said, wondering, indeed, if those times that they have children might even drive them back to light beer as calories become a concern.

But Azer reminded the audience that legal marijuana, which by 2026 could be a $50 billion business in sales alone, remains the biggest threat. Support for legalization is growing: 58 percent of the country supports recreational use, according to Azer. And the drive for legalization isn’t about to end.

“The consumer and voter will continue to drive momentum, and the legislatures will catch up,” she said.

So what does that mean for beer?

“I think it will negatively impact alcohol consumption,” Azer said, to laughs from the room.