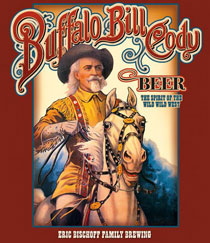 CODY, WY — If you needed more proof that the craft beer industry is growing, look no further than the pro wrestling business.

Yes, you read that correctly – wrestling.

Eric Bischoff, of WCW, WWE and most recently TNA fame is the newest cast member to enter the craft beer ring, and he’s hoping he won’t have to tap out anytime soon.

Eric Bischoff Family Brewing, the name of Bischoff’s newest ‘passion project’ will have beer in the Wyoming, Montana and Idaho markets as early as this week.

His first beer, a medium-bodied rye beer by the name of Buffalo Bill Cody, features the iconic Wild West figure on the label. Bischoff said the beer was brewed with the session drinker in mind.

“It’s not an overbearing hoppy flavor,” Bischoff said. “It’s the type of beer you drink several of without feeling like you have had too many.”

In addition to the Buffalo Bill Cody, Bischoff said he is planning to release a Pale Ale and Stout later this summer. All of his beers are currently being contract brewed through Yellowstone Valley Brewing, in Montana.

But that’s not all he has planned. Bischoff, already proving his ability to read trends within the industry, will soon begin packaging his beer in cans — hoping to capitalize one of the fastest growing segments in craft beer.

Bischoff’s interest in quality beer began long before his involvement in the pro-wrestling business. As a high school senior, studying in Germany, he quickly learned the difference between the large U.S. macro brews and the small backcountry offerings in rural Germany.

“I had never been exposed to wheat beer and pilsners before I went to Germany,” he said. “It was the first time that I had tasted so many unique flavors in beer.”

When he returned to the states, his interest in micro brewed beer grew and he admits he became somewhat of an ‘avid consumer’ throughout his collegiate years.

The idea to start Eric Bischoff Family Brewing really started manifesting itself two years ago, when he saw the need for a well branded brewing company in Wyoming.

“I was looking at the success of the microbrew industry and the small microbrew brands and I thought, you know I am really going to do this,” he said.

Although Bischoff, who turns 55 this week, spends a majority of his time in the branding and entertainment industry, he is serious about beer.

“This is a project that I intend to be very hands-on with,” he said. “I want to do whatever needs to be done to allow me to learn from the ground up — if that includes loading the product myself into the back of a truck and delivering it to local bars and restaurants in Wyoming, I am looking forward to doing it.”

Now, Bischoff’s aiming to make over-the-top, unforgettable beer and turn it into a “Brew World Order.”

His personal goal is opening a production brewery in the next 12-18 months, still, he’s being cautious, he said.

“I got into this project for the love of it, not to get rich overnight,” he said. “I want to be real slow and smart.”

If Bischoff’s past is any indicator however, the beer industry could be in for a surprise. His list of accomplishments includes a New York Times best-selling book, the creation of his own production company (Bischoff, Hervey Entertainment) in 2003, and increasing the revenue of WCW from $24 million in 1993 to $350 million in 1998.

While it remains to be seen how successful Bischoff will be in the craft beer industry, one thing is certain -the relationship between beer and wrestling has come a long way since Stone Cold Steve Austin drove a Coors Light truck to the ring and chugged a few silver bullets.

As for Bischoff, he seems to have already mastered the mentality of a craft brewer.

“We don’t want to put too much pressure on ourselves,” he said. “Let’s see how well we can grow it and whatever happens, happens.”