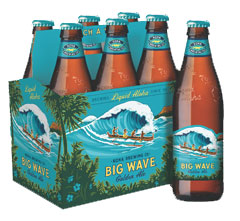 The award marks the third time Kona has medaled at the U.S. Open Beer Championship, having netted two bronze medals in 2009 for its Longboard Island Lager and Fire Rock Pale Ale in the American Lager/Pilsener and the Pale Ale categories, respectively. With an ABV of 4.4%, Big Wave Golden Ale is a standout in the emerging field of session beers that achieve high drinkability balanced with lower alcohol content so that multiple beers may be enjoyed over a session.

“This is an exciting competition that serves as testament to what an incredible first year Big Wave Golden Ale has had on the mainland,” said Kona Brewing president Mattson Davis. “We’re proud of what our brewers have accomplished over the past two decades by creating a well-balanced brew with such bright hoppy flavor and aroma, and we’re stoked to see that the U.S. Open judges agreed on Big Wave’s sessionability.”