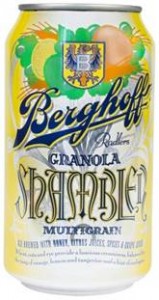 CHICAGO, IL — On Monday, July 7, the ever-changing and growing Midwestern brewery Berghoff Brewing will release its latest seasonal offering, Granola Shambler, a mixed-grain radler that is bright, refreshing and complex, with delicately balanced hops. Available in extremely limited quantities while supplies last, Granola Shambler is the perfect summer sipper, ideal for drinking on a warm afternoon, and another inventive beer from Berghoff and owner Ben Minkoff, cementing the classic brand’s newfound place among the nation’s top craft breweries.

“When I think of summer, I think of a tall, cold stein of beer or a pint of frosty lemonade — and radlers combine them for unbeatable refreshment,” says Minkoff, whose family has owned General Beverage Distributors in Wisconsin for the past 80 years and purchased the Berghoff brand in 1994. “Our Granola Shambler is a fun, fresh take on a shandy, combining mixed grains such as barley malt and oats with a splash of muscat grape juice and essences of a variety of citrus fruits to create the ultimate warm-weather beer.”

Granola Shambler will be available in six packs of cans at top craft beer bars and shops throughout Illinois, Wisconsin, Michigan and Indiana through August. Inspired by shandies and radlers, traditional mixtures of beer and lemonade or lemon soda, Granola Shambler is brewed with barley malt, wheat, oats and rye for a dry, creamy texture with a touch of caramel malt for golden richness. It is lightly hopped, to balance it, then splashed with muscat grape juice for light, raisin-y fruit character. Minkoff finishes the beer with orange, lemon, lime, grapefruit and tangerine flavors and a subtle hint of cool spice. It is a highly carbonated, light-drinking instant classic that beer lovers are sure to enjoy until the leaves begin to fall. Granola Shambler also pairs beautifully with summer foods, like grilled fish and vegetables, barbecue chicken or a nice juicy brat. Fans and curious drinkers are encouraged to seek out this exciting new beer and relate their feedback to Berghoff, where their honest opinions will help drive future seasonal recipes.

Minkoff consulted with brewing experts Randy Mosher and John Hannafan to create the top-notch German-style beers brewed at Berghoff’s Stevens Point production facility, located in Stevens Point, Wisconsin. Mosher is an acknowledged craft beer expert, whose books include Tasting Beer (Storey, 2009) and Radical Brewing (Brewers Publications, 2003.) An accomplished designer, he has also contributed to Berhgoff’s packaging and brand messaging. Hannafan, who until recently ran his own successful Chicago-based brewery and brewing consultancy firm, is now the director of education at the world-renowned Siebel Institute of Technology in Chicago.

For more information about Berghoff, including full descriptions of all their beers and where to find them, please visit www.berghoffbeer.com.

Brewbound Frontlines: Misogyny and Misconduct in the Beer Industry