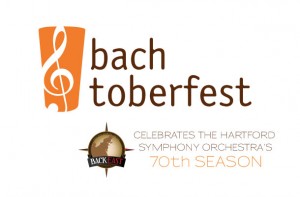 BLOOMFIELD, CT — Back East Brewery and the Hartford Symphony Orchestra are releasing Bachtoberfest, an Oktoberfest-style seasonal beer produced by Back East Brewery. Beginning the week of August 26th, Bachtoberfest will be available on tap at many great restaurants throughout the Greater Hartford and New Haven markets, including several restaurants in downtown Hartford.

Bachtoberfest also will be available for purchase at the Hartford Symphony’s 70th Anniversary Opening Night performances at The Bushnell Center for the Performing Arts October 11 and 12. Beginning August 28th, Bachtoberfest will be available for purchase in half-gallon growlers in the tasting room at Back East Brewery in Bloomfield, CT. Back East will be donating a portion of the proceeds from each growler sold to the Hartford Symphony Orchestra in support of their artistic, educational, and community programs.

Back East Brewery Co-Founder Tony Karlowicz says, “It is an integral part of our mission as a local brewery to support this vibrant community. The Hartford Symphony’s 70 year dedication to the arts speaks for itself and we are thrilled to partner with them for this special edition beer.”

Back East Brewing Company is a small, craft brewery located in Bloomfield, CT. Founded by cousins Tony Karlowicz and Edward Fabrycki, Jr., Back East opened in July 2012 and is now distributed on draft and in cans throughout Greater Hartford and New Haven. For more information on Back East Brewery, please visit www.backeastbrewing.com.

Marking its 70th Anniversary Season in 2013—2014, The Hartford Symphony Orchestra (HSO) is Connecticut’s premier musical organization. The Hartford Symphony is the second largest orchestra in New England and is widely recognized as one of America’s leading regional orchestras. Under the musical direction of Carolyn Kuan, the HSO presents more than 100 concerts to over 120,000 people each year. For more information on the HSO, please visit www.hartfordsymphony.org.