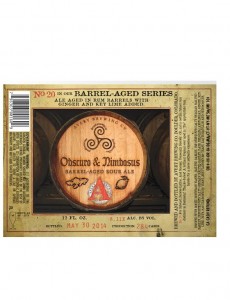 Boulder, CO — This Sunday the Avery Brewing Company will release No. 20 in it’s Barrel-Aged Series, Obscuro & Nimbosus, a tropical, sour ale aged in dark rum barrels and spiced with a touch of fresh ginger and key lime zest.

“We love rum. We love beer cocktails. This beer replicates the flavors in one of my favorite rum drinks in an original, authentic way,” said Adam Avery, the brewery’s founder. “It’s crisp, sour and refreshing. This is the first beer in this series inspired by a cocktail, but I doubt it will be the last.”

Avery’s Chief Barrel Herder, Andy Parker, created the beer as a new take on a classic flavor combination and said that the key was a light touch when it came to the spicing.

“I wanted the balance of lactic acid, malt structure, lime, ginger and the character of the rum barrels. These flavors simply make sense together,” said Parker. “But even though it’s based on a cocktail we wanted more than just a copy. We wanted our own flavor, our own character.”

Obscuro & Nimbosus weighs in at 8.11% ABV. It is dark in color with malty notes of caramel and cola and a clean lactic sourness. Parker said a “delicate hand” was used when adding the fresh ginger and key lime with much care given to not overdoing it. It was fully fermented in steel and then moved to fresh dark rum barrels where it slumbered for about eight months. Only 284 cases were produced.

Obscuro & Nimbosus will debut at a special Father’s Day release party on Sunday, June 15th at the Avery Tap Room in Boulder. To celebrate Father’s Day Avery is offering one free pint of Avery IPA or White Rascal to any dads who come out for the party. Kids will receive a free root beer. The line party will start at 11am and will feature rare beers and Tap Room exclusives. Bottle sales will begin at 1pm. Bottles are 12oz. and will be sold for $12 each. Fans will be able to buy up to 12 bottles, and availability can only be guaranteed at the Avery Tap Room during the release party until the beer runs out. For more information, beer connoisseurs can check www.averybrewing.com or email info@averybrewing.com or check out Avery’s Facebook page at facebook.com/averybrewing.