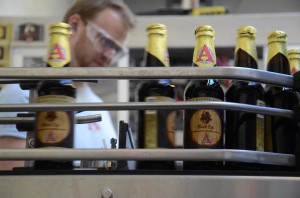 “Black Eye tastes like the best kind of toasted marshmallow,” says Founder and CEO Adam Avery. “One that’s been soaked in rum.”

Avery’s Head Brewer Matt Thrall also gets lots of rum flavors from Black Eye. “With the rum are notes of vanilla and sweet dark cherries, followed by a warming feeling. At 18%, this isn’t really a sessionable lawnmower beer,” Thrall says. “But it’s the perfect snow shovelingÔÇï beer.”

Black Eye will debut at a release party on Sunday, October 12 at the Avery Tap Room in Boulder. The line party will start at11am and will feature rare beers on draft, with bottle sales beginning at 1pm. Bottles are 12oz. and will be sold for $12 each. Only 424 cases were produced; fans will be able to buy up to 12 bottles, and availability can only be guaranteed at the Avery Tap Room during the release party until the beer runs out.

Established in 1993, Avery Brewing Company has developed a reputation as being one of the most daring and visionary breweries in the nation. They are the brewers of Avery IPA, White Rascal Belgian-Style White Ale, The Maharaja Imperial IPA, Mephistopheles’ Stout and more than 20 other year-round and seasonal beers. For more information, beer connoisseurs can check www.averybrewing.com, email info@averybrewing.com, and follow Avery’s Facebook page and Twitter feed for the latest news.