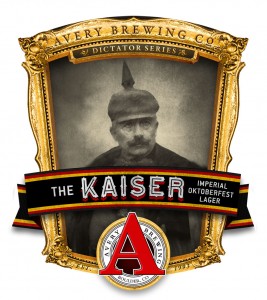 Boulder, CO. — Kaiser Wilhelm once said, “Give me a woman who loves beer and I will conquer the world.” If the Kaiser and his significant other had tipped this bottle, we’d all be “sprechenden Deutsch!”

For The Kaiser, Avery takes a traditional Oktoberfest — gorgeous, deep copper sheen, massive malty backbone, and spicy, floral, pungent noble hops — then intensifies each attribute to create a 10.2% ABV Imperial Oktoberfest. The Kaiser was the third in the brewery’s “Dictator Series,” which also includes The Czar Imperial Stout and The Maharaja Imperial IPA.

Released annually since 2004, this year’s The Kaiser highlight’s the benefits of the brewery’s new yeast propagation system.

“The rich German malts really take center stage in this year’s The Kaiser,” said Avery’s Director of Operations Steve Breezley. “The goal with any lager is to control the formation of the esters, alcohols and other yeast driven flavor compounds during fermentation and keep them to a minimum to create a crisp, clean beer. Yeast health is key and with the help of our new yeast propagation system our yeast health is the best it has ever been.”

The Kaiser will hit stores the second week of August in select markets. There will also be a release party at the Avery Tap Room on Friday August 9th at 5 p.m. so throw on your dirndls or lederhosen and raise a stein with us to celebrate this incredible beer.

Established in 1993, Avery Brewing Company has developed a reputation as being one of the most daring and visionary breweries in the nation. They are the brewers of Avery IPA, The Maharaja Imperial IPA, White Rascal Belgian Wheat Ale, Mephistopheles’ Stout and eighteen other year-round and seasonal beers. Please go towww.averybrewing.com for more information on Avery beers.