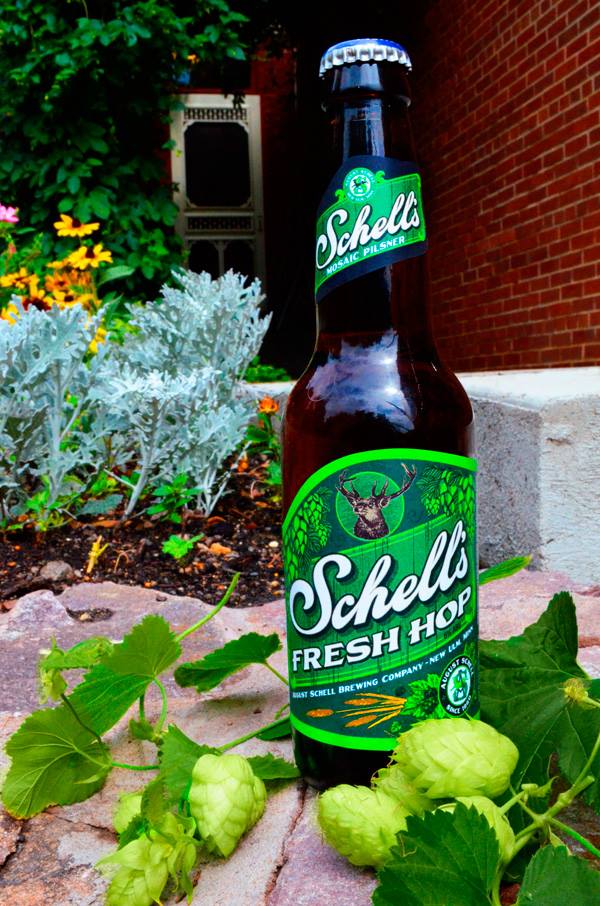 Last fall, the August Schell Brewing Company released Fresh Hop Citra Pils as part of its Stag Series. Due to the popularity of this beer and the fun had by the Schell’s crew when making it, they’ve decided to release a fresh hop beer variety annually as a limited seasonal offering.

The Schell’s Fresh Hop Pilsner Series beers will be made each year during prime hop harvesting season. Fresh hops don’t survive long after being cut, so they are picked, shipped and quickly added into the kettle, preserving the aromatic oils and resins that add so much flavor to the beer. This beer is best when consumed fresh and must be refrigerated.

This year’s Fresh Hop beer will be a pilsner that is single hopped with the new and exciting Mosaic hop variety. This hop gives off an abundant mix of flavors and aromas to the beer, hence the name Mosaic. Its characteristics are found to be floral, tropical, fruity, earthy and sweet. It can contribute notes of blueberry, mango, lemon, lime, other citrus, pine, fruit punch, herbs, spice, stone fruit, mint, bubblegum and black pepper.

Schell’s Fresh Hop will be a very limited brew, yielding 100 barrels. The beer will be packaged in 6 packs and 1/6 barrel kegs.

August Schell Brewing Company, located in New Ulm, MN, sits atop the same site it was built on in 1860. With its sprawling grounds, beautiful gardens, Schell Mansion, and deer park, the brewery is a tourist destination for any beer lover. Schell’s boasts a proud heritage of 153 years of continuous family ownership and specializes in craft beers. In addition to the line of specialty beers, Schell’s also produces Grain Belt Premium, Grain Belt Premium Light and Grain Belt Nordeast. For more information on Schell’s Brewery, tour schedules or any of their 17 quality beers, go to http://www.schellsbrewery.com.