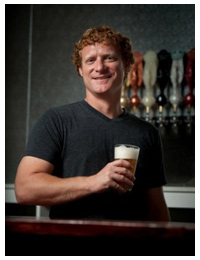 LOS ANGELES, CA — Angel City Brewery is under the proud new ownership of Alchemy & Science, a boutique brewing initiative led by craft beer veteran Alan Newman. Alchemy & Science assumed control of Angel City in January 2012 and has been reviewing and revising all elements of the brewery’s plant, location, history and development plans. Angel City Brewery looks to introduce its first beer to the LA marketplace in early June.

Additionally, Angel City is proud to announce the appointment of Brewmaster Dieter Foerstner. Foerstner comes to Angel City from Gordon Biersch in Tempe, AZ where he was Head Brewmaster for Gordon Biersch. Foerstner’s passion for, and pride in, quality craft brewing runs deep — both his great grandfather and great uncle were Los Angeles brewers. Today, Foerstner’s goal is to help keep the excitement for the nascent craft beer movement in Los Angeles alive and growing.

“I’m thrilled to join the brewing community in this city,” said Foerstner. “There is a great collection of people who are passionate about making and drinking excellent beer in LA, and there is so much more we can do. Los Angeles is becoming a real beer town at last, and we are proud to carry the name “Angel City” — because we hope to become Los Angeles’ beer.”

Newman, a long-time Vermonter and the co-founder of Magic Hat Brewing Company, which, over 20 years, grew to be the 9th largest craft brewer in the U.S. now lives in Downtown LA and is laying the foundation for Angel City to fulfill its long-held potential.

“Angel City came to us with a great vision for the brand,” said Newman. “Now we have the pleasure of bringing that vision to life.”

“It’s an exciting time to be in Downtown L.A. — and to be in the beer business,” adds Newman. “But we don’t consider ourselves just brewers. An establishment like this can, and should be a vital part of the community. The very nature of beer drinking is communal, social. We see that as rationale for making Angel City fully integrated into the Arts District and Downtown renaissance by supporting the renovation and revitalization of its neighborhoods.”

Angel City is now brewing and the smell of grains and hops are in the air. The first release will be delivered to market in early June with additional releases throughout the summer. The Angel City brewery itself is under renovation and expects to open in the fall with a bar featuring al least 8 taps — including a variety of ongoing experimental creations. Plans include brewery tours and tastings and the sale of growlers on site along with Angel City merchandise.

Angel City BreweryÔäó is excited to be part of the renaissance of Downtown LA, by bringing old-world, small-batch, craft brewing to the new world of the expanding Arts District. Angel City is committed to the continued growth and revitalization of its neighborhoods by being an interactive and supportive partner to the arts and business communities, as well as the burgeoning craft beer movement in Los Angeles.

Angel City BreweryÔäó, under the management of Alchemy & Science, is located at 216 South Alameda Street, Los Angeles, CA 90012. Angel City Brewery is online at www.AngelCityBrewery.com, on Facebook and on Twitter. The phone number is (213) 622-1261. Angel City Brewery will launch its first beer in June 2012 and plans to open as a brewery and bar for tours, tastings and events in fall 2012.